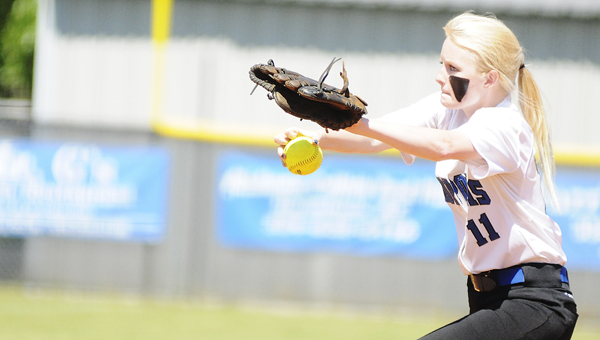 Demopolis pitcher Hanna Malone throws a pitch during a game against Dallas County Thursday during the class 5A, area 6 tournament.

DEMOPOLIS — The Demopolis Tigers left no doubt Thursday that they are the best team in class 5A, area 6.

The Tigers won the three-team area Thursday with two dominant victories over Dallas County. Led by tournament MVP Jessica Adams, the Tigers blew out the Hornets 17-2 and 15-0 to take the title.

“With all the layoffs and rainouts we’ve had the last three weeks, we haven’t been able to get out and fine tune our game so we’ve had to rely on it in practice,” said Demopolis coach Stephen Campbell. “For them to have a long layoff and not get distracted with 250 of their classmates [watching] and not get distracted by those outside influences, that’s what I’m most proud of.”

Campbell said he spoke to his team about taking the easiest path possible Thursday, which meant staying out of the loser’s bracket. The Tigers did that with an opening win over the Hornets and then needed only one more game to finish off the championship.

Campbell credited his team for staying on track throughout the day, even when it got behind 2-1 early against the Hornets in Demopolis’ opening game.

“It’s easy in a game to get frustrated but there are 21 outs made to win a game. That’s a lot of outs a team has to get against you, so whether you boot one there or hit a later pop here, just stay the course because you’ll always have opportunities,” Campbell said. “You can’t change the past. What are you going to do in future at bats and current at bats to make a difference?”

Dallas County and Wilcox Central had to play a first round game to see who would play Demopolis in what amounted to a winner’s bracket championship game, where the victor was assured of moving on to Troy for the next round of the Alabama High School Athletic Association playoffs.

The Hornets won the opener 20-3 after a 20-run first inning, but had little luck against Demopolis and pitcher Hanna Malone. Dallas County’s Keyondra Fletcher hit a double to give Dallas County a 2-1 lead but the Tigers stormed back Demopolis with four in the second inning, led by Ole Miss commitment Abigail Latham’s two RBI single.

While the Hornets’ offense bogged down, the Tigers’ were just getting started. Demopolis exploded for 12 runs in the bottom of the third to reach the required lead to reach the mercy rule.

Seemingly every Tigers’ player got in on the fun. Kendall Hannah had a 2 RBI single and Jade Montgomery totaled 3 RBIs on a single and double in the inning.

Demopolis’ win assured the Tigers of advancing on to the next round of the playoffs and gave the team a spot in the area championship game. The Hornets had to play a rematch with Wilcox Central in an elimination game, which they won 12-2, but then Dallas County had to play Demopolis again.

In the second game, the Tigers remained a riddle the Hornets just couldn’t solve.

The second game was never in doubt as the Tigers rolled to a 14-0 win. Demopolis scored five runs in the opening inning behind a RBI double by Latham and a RBI single by Adams, who also batted in two runs in the bottom of the second.

Malone also started in game two. She struck out two batters but kept the Hornets off base by forcing ground outs and fly balls to get her team out of innings.