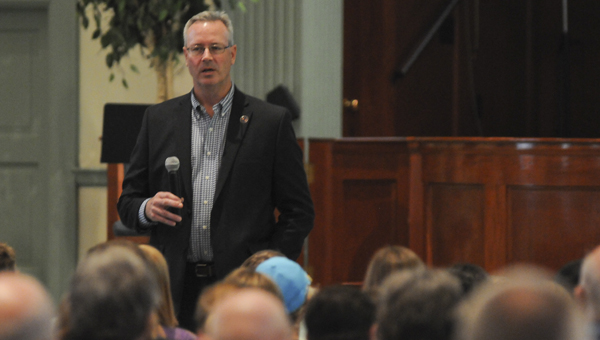 By Blake Deshazo
The Demopolis Times

There wasn’t an empty seat in the house Wednesday night at First Baptist Church, as a crowd of people showed up to hear the story of the late Philip Lutzenkirchen, who played tight end for the Auburn Tigers from 2009-2012.

Mike Lutzenkirchen, who heads up the Lutzie 43 Foundation, has been sharing his son’s legacy since just a few months after his tragic death in a car accident in LaGrange, Ga.

“We lost Philip on June 28, and I think the first school that asked me to talk was in early August,” Mike said.

Before Mike took the floor, a video played showing highlights from Philips illustrious career at Auburn. The tight end was known for catching the go-ahead touchdown pass from Cam Newton in the 2010 Iron Bowl in Bryant-Denny Stadium. The win put the Tigers in the Southeastern Conference Championship and led them to a National Championship.

“I followed [Philip] in football, and we have connections with Auburn and Alpharetta, Ga.,” said Bobby Joe Glass, who was in attendance. “We heard he was going to be here, and we just wanted to be here to hear the story.”

Philip was known for many things during his 23 years of life, and his father used those to show how good of a person Philip was, but one bad decision changed his and his family’s life forever.

“Philip always entertained people the way he carried himself and lived his life,” Mike said. “This isn’t entertainment, but it is using his life, his platform and the name he made for himself to get the people’s attention to want to hear me talk. I just happen to be the voice of the message that’s Philip.”

As Mike talked about Philip’s football career, he pointed out the 14 touchdowns that his son scored during his career at Auburn, which is a record for most career touchdowns by an Auburn tight end.

Mike said every time his son scored, he pointed to the sky and thanked God.

It is acts of faith like that Mike uses to teach people and try to make a difference in their lives.

“You do this so often, you can see when the kids have an open mind and an open heart, and they’re listening,” Mike said. “[Philip] was a very recognizable person, especially here in the south, and I hope the kids get the message that if this can happen to Philip, it can happen to anybody.”

There were many lessons to be learned as Mike addressed the crowd, but there was one he wanted to instill in everyone.

“Be as bold as a friend and teammate off the field as you are in the field of competition,” Mike said. “Kids that rethink what they’re doing need to get their friends some pressure to stop making poor decisions, and once the numbers add up, maybe they’ll be safer.”

As the last words of his speech rang out, he surely left a lasting impression.

“I think I will think more about my own decisions,” said Matthew Trest, a senior at Demopolis High School. “Everything we do has an affect on us. The one thing he said that stood out to me was that bad decisions don’t discriminate, and I think that is true. No matter what society says, only one person controls the outcome of it.”