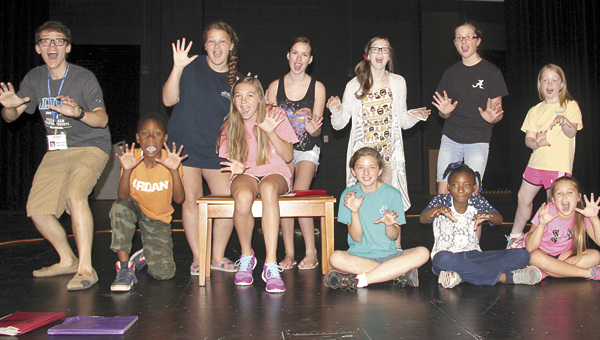 Steven Martin, left, with cast members of this year’s 21st Century Summer Theatre program. The cast is practicing this week for the opening of “King Arthur’s Quest” on Friday, 5 p.m., at the Demopolis High School Auditorium.

Local children are preparing for some of their first stage performances. “King Arthur’s Quest” will be performed Friday, June 26, at 5 p.m. in the Demopolis High School Auditorium. This play is being put on by the Missoula Children’s Theatre out of Missoula, Montana.

The 21st Century Summer Enrichment program from Westside Elementary School in Demopolis is funding the theater. Program Directors Elsie Collins, and Stephanie Pittman said they are excited to have the theater return to Demopolis.

“The kids and parents love when the theatre comes. It adds to the culture here in Demopolis. It really helps the children learn public speaking and they do such a great job on stage. They are a lot better than me, I couldn’t do it myself,” Collins said.

Pittman is happy to have the theatre here to bring additional culture to Demopolis as well as building confidence within the children participating.

There are two tour directors from the Missoula Children’s Theatre here in Demopolis teaching the participating children King Arthur’s Quest. In just four days, the children will have memorized songs, dialogue, and movements to perform their okay on opening night.