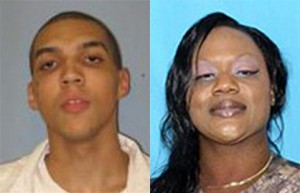 Eric Washington, left, and Shirley Dawkins, right, were captured Wednesday following an incident that involved the shooting of a sheriff’s deputy in Greene County.

During the morning hours of Wednesday, July 1, in Greene County, authorities were looking for two suspects involved in an incident that led to shots being fired at an on-duty deputy. The two shooters were identified as Shirley Diane Hawkins and Eric Washington.
Greene County Deputy Tommy Johnson, a resident of Demopolis, was injured when a bullet went through the glass of his patrol SUV when he was responding to a call in the Boligee area sometime between 9 and 10 p.m. Tuesday. According to a source close the Johnson family, the deputy’s injuries are not life threatening.
Multiple agencies, including those from Eutaw, Demopolis and Marengo County were involved in the search for Washington and Hawkins. Both were captured prior to 8 a.m. Tuesday and were being held at the Greene County Jail.
Alabama Law Enforcement Agency’s State Bureau of Investigation Spokersperson said Eric Washington is being charged with attempted murder of the deputy. Shirley Hawkins has not been charged with a crime at this time but remains in the Greene County Jail.