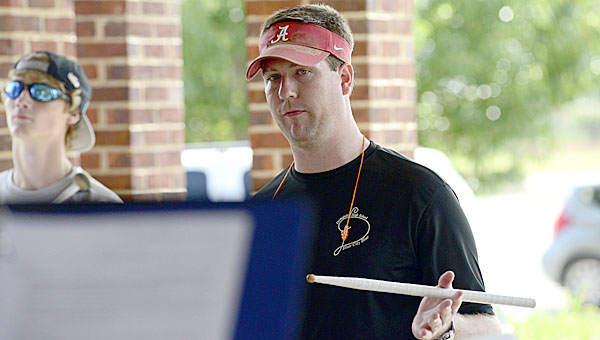 Demopolis High School Band Director Matt Fields and the marching band start knocking some of the dust off Monday at the high school as they began summer band camp.

A large influx of students joining Demopolis High School’s marching band should provide enough talent for the program in 2015 while newcomers get adjusted.
DHS band director Matt Fields said the band has grown to nearly 80 members, a huge jump from the 52 that marched for the Tigers last year.
Approximately half of the band members will be eighth graders and freshman.
“I think one of the biggest challenges we will face is bringing in so many new people,” Fields said. “Our band is very young overall so we don’t have a whole lot of that senior leadership that you would like to see, but that bodes well for the future.”
Fields said the band’s escalation of students is due to the success the school has had with its middle school feeder program
“We’ve got a lot more kids coming in,” Fields said. “Those middle school kids are finally making it up to the high school level. It’s been a process of several years now. We’re young, but we’re bigger.”
Fields and the marching band started knocking off some of the dust after summer vacation Monday at summer band camp.
“We haven’t been as rusty as we have in past years,” Fields said. “I think that is because the kids worked real hard at the end of last year. They have made a lot of good progress and growth. Even though we have a lot of younger kids I feel like we are starting further ahead than we have in the past. They are going out there and they are getting after it pretty good right now.”
Fields said the band is enthusiastic about the upcoming football season and has already scheduled several big events for the upcoming school year.