Tigers adapt to changes this summer

For more details see the Saturday, July 11, print edition of the Demopolis Times. 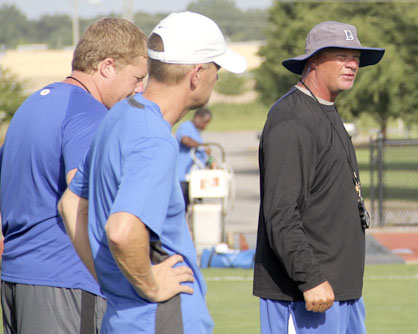 Former Sweet Water Head coach Stacy Luker was hired as Demopolis High School’s athletic director and football head coach in January. Luker made a name for himself at Sweet Water where he led the Bulldogs to five state titles in 2004, 2006, 2007, 2008 and 2010. His overall record at four schools is 177-71.

‘Change’ has been the theme since Stacy Luker, Demopolis High School’s new athletic director and football coach, was hired in January, but he and the team have been able to adapt quickly.
“That’s been one of the biggest things, just trying to adapt to the changes, but I think they’ve done pretty well with that,” Luker said. “We’ve been able to make a lot of progress within the last month. I know we made more progress in June than we did in spring training. I’m certainly pleased with that.”
Luker said being from Marengo County made the transition from his last school, Neshoba Central High School in Mississippi, to Demopolis a smooth one.
“It was not unfamiliar territory to me,” Luker said. “I grew up in Sweet Water where I coached and played. As an assistant and a head coach, I spent a total of about 19 years there. I’ve been real familiar with this program and the people involved in it. That was really a plus probably for me coming in, just knowing the territory and the school.”
While Luker is all too familiar with the Tigers’ football program, there are still some changes the Tigers are getting used to.
One is a completely different defensive coaching staff with only one coach returning that has been there for the last few years.
The new defensive coordinator is Luker’s son, Drew, who took over after Matt Geohagan took the head-coaching job at Bibb County. The defensive coordinator is going into his fourth season at DHS after coaching the Tigers’ linebackers for the last three years.
“It’s a new defensive coaching staff, but they are doing a lot of the same things we’ve been doing, so the kids are familiar with that,” Luker said.
Luker said he’s pleased with the Tigers ablility to adapt after changing the offense from an option-style attack to a Wing-T attack.