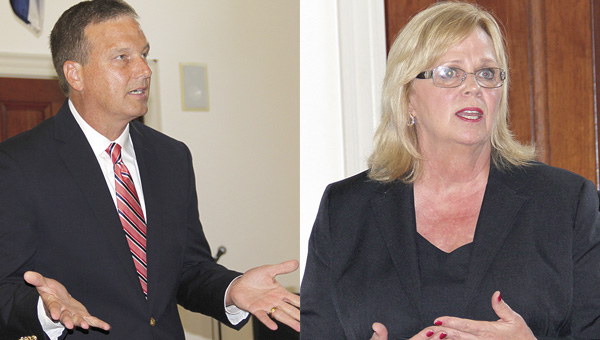 Dr. Keith Davis, left, and Dr. Vicky Spears were the first two candidates to be interviewed for the superintendent position with the Demopolis City Schools. Davis was interviewed Monday and Spears on Tuesday. Three more interviews will be conducted at Rooster Hall Wednesday through Friday.

(Editor’s Note: This is the first of two articles to be published on the ongoing interviews of superintendent candidates for the Demopolis City Schools. The next article will be published in the Saturday, July 25 edition of the Demopolis Times.)

Members of the Demopolis City Schools Board of Education began the process of interviewing five candidates for superintendent this week.
The board is interviewing one candidate each day this week, Monday through Friday. The candidates are spending a day in Demopolis with school board members providing a tour of the schools and cities. The interviews are being held from 5 to 7 p.m. each day at Rooster Hall. The public is invited to attend these meetings.
The school board presented each candidate with 15 questions. Following are some of the comments made by the candidates during the interview process.

Dr. Keith Davis
The first candidate to be interviewed was Dr. Keith Davis who currently serves as the superintendent of the Winfield City School System near Montgomery.
When asked how he would close the academic achievement gap, Davis told the board he considers curriculum to be one of his biggest strengths, pointing out that Winfield has become one of the state’s Blue Ribbon Schools.
“The key to moving forward and improving is to know where you are at,” he said. “There is no doubt we can get achievement up (in Demopolis). We have the teachers and we have the facilities. You just need an instructional leader and I am an instructional leader.”
Davis did take a couple of questions from the audience, including why he wanted to be the superintendent in Demopolis.
“I’m a builder. I like to think that by working together we can improve. This is a good school system as it is, but I have no doubt that, over time, we could see it get better and better. I want to be a part of that,” he said.

Dr. Vicky Spears
The second candidate interviewed was Dr. Vicky Spears who currently serves as a principal with the Cullman County School System.
Spears said that as superintendent she would be willing to make the tough calls that come with being the leader of the school system.
“There are times when people need to someone to make decisions for them … somebody has to make the tough decisions. I’m willing to do that. I would like to say I’ve always been right (in those decisions), but when I haven’t I learned from them. Collaboration is very important, but at some point someone has to make the decision,” she said.
The candidate said she would like to see the many positive things going on within the Demopolis School System brought together to meet specific goals.
“I saw a lot of wonderful things in your school system,” Spears said. “The challenge is to bring all that together; streamlining those efforts. If everybody is doing something different, you can’t be successful. To meet high expectations, at some point you have to formalize those processes. We need to connect the dots so there is one vision.”

For more details from the interviews on Monday and Tuesday, see the Wednesday, July 22, print edition of the Demopolis Times.