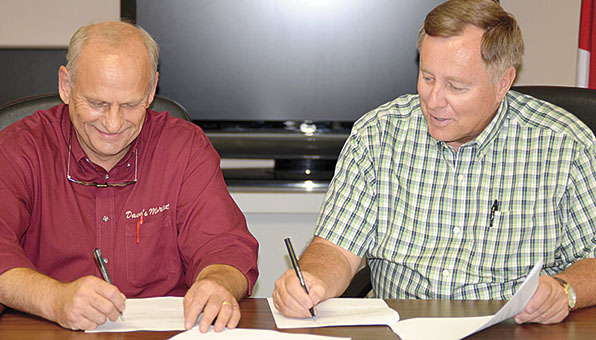 Dave Oliver of Dave’s Market, right, and Thomaston Mayor Jeff Laduron sign an agreement that will bring a grocery store to the town in the near future. A grocery store has been a goal for Thomaston and Marengo County officials for many years.

A long-time need will soon be filled for the residents of Thomaston as town officials signed an agreement with an area grocer who will open a new location there in the coming months.
David Oliver of Dave’s Market is expanding from his current location in Valley Grande to open a new store in Thomaston. Oliver plans to utilize the former Marengo County High School gymnasium for the store.
Marengo County Economic Development Authority Executive Director Brenda Tuck said bringing a grocery store to Thomaston was a long-standing goal.
“The town has wanted to get a grocery store for 20 years. When I joined the EDA in 2012, I asked what they needed and wanted for their community, and a grocery store was at the top of that list. We are happy to have helped the town fulfill one of its biggest needs and bring additional jobs to our county,” Tusk said.
According to Tusk, the store will provide 19 jobs, 11 full-time and 8 part-time and will make a total investment of almost $1 million.
Last week’s formal signing between Oliver and Thomaston Mayor Jeff Laduron will lead to an official groundbreaking, anticipated to be held in August.
“This is going to be wonderful for our community,” Mayor Laduron said. “This is going to enable us to build our town. It’s a big, big benefit.”
Laduron said that for many years residents of Thomaston were forced to look outside of their own community for groceries, but now will be able to shop at home.
“This is going to be more convenient for all of our residents and is important for our older residents who now won’t have to travel for their groceries. People in surrounding communities will also benefit by not having to drive as far,” he said.
The mayor thanked many people for their role in bringing the grocery store to Thomaston.
“I can’t thank (Tuck) enough. We’ve been trying to get someone here for several years and we couldn’t have done it without her help,” Laduron said. “I also have to thank the Marengo County Commissioners and Commissioner Calvin Martin who has been a big help and played a big role. Also, the members of Thomaston Town Council were very helpful throughout the process.”