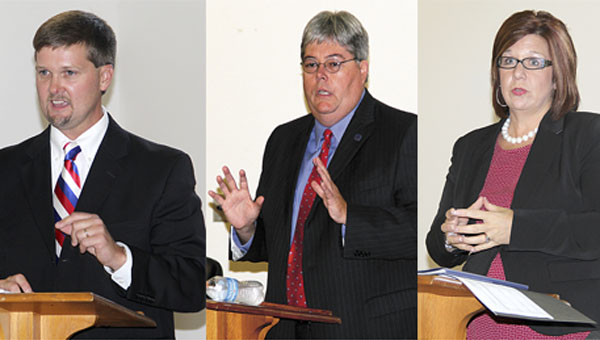 (Editor’s Note: This is the second of two articles to be published on the interviews of superintendent candidates for Demopolis City Schools. The first article was published in the Wednesday, July 22 edition of the Demopolis Times.)

Members of the Demopolis City Schools Board of Education completed the process of interviewing five candidates for superintendent this week.
The board interviewed a candidate each day this week, Monday through Friday. The candidates spent the day in Demopolis with school board members providing a tour of the schools and cities. The interviews were held from 5 to 7 p.m. each day at Rooster Hall.
The school board presented each candidate with 15 questions. The first two candidates, Dr. Keith Davis and Dr. Vicky Spears, were interviewed on Monday and Tuesday and were featured in Wednesday’s Demopolis Times. Following are some of the comments made by the candidates interviewed Wednesday through Friday.
The board announced Friday that two finalists for the position will be named during a special board meeting at the school board office on Monday at 5:30 p.m.

Mr. Kyle Kallhoff
The third candidate to be interviewed was Kyle Kallhoff who currently serves as the superintendent of the Chickasaw City School System.
Kallhoff began his career as a special education teacher before becoming an administrator.
“I believe every child should have the opportunity to learn. Our job as administrators and teachers is to provide the resources for them to be successful. Whatever system I’m leading I am going to produce decision makers and problem solvers,” Kallhoff said.
When asked how he would balance taking action with listening, Kallhoff said he is the type of person who likes to have all the facts.
“I always want to listen and gather data before I take action,” he said. “However, there are three exceptions: first, when student safety is a concern; second, when laws are being broken; and third, when the integrity of our schools is being compromised.”
Touting his financial experience, Kallhoff stated that when he began at Chickasaw the system had $26,000. The system now has a budget of $80 million.

Dr. Donald McPherson
Dr. McPherson currently serves as the superintendent of the Coffee County School System. He began his career as a math teacher and coach.
“Public education is the great equalizer. You can accomplish anything you want to through public education. You get out of it what you put into it,” McPherson said.
He said his decisions would be made based on what is best for students.
“Every decision I make will be in the best interest of children,” he said. “Parents have a voice, teachers have a voice, politicians have a voice … the only people who don’t have a voice are our children.”
When asked about discipline, McPherson said it is a process.
“You have to build a foundation for discipline. If your school is not clean and safe, you can’t go any further. Once you have those things you can have discipline, which leads to teaching and then learning,” he said.

Dr. Elisabeth Davis
Dr. Davis currently serves as the director of curriculum and instructor with the Pelham City School System.
Davis said she believes that teamwork is the key to building a great school system.
“A leader is only as good as the team. It is important to be approachable and to base your decisions on what is best for the students. I don’t think anyone can lead without collaboration. But, a leader does have to establish expectations and hold people accountable,” she said.
One of the questions asked referred to closing the achievement gap between students.
“You have to stay on top of changes and identify where you need to grow.” She added, “Every child has to have a plan, not just a plan on a computer, but one that the student knows about and the parent knows about.”
When asked how she would “sell” Demopolis schools to potential enrollees, Davis replied, “Your schools are the heart of this community. There is a strong and well-supported education foundation and the community provides funding of 18 mills instead of the state minimum requirement of 10 mills. And, there is a balance of academics, fine arts, athletics, strong student organizations, and duel enrollment opportunities with potential to expand into a new building.”