Beauty pageants are not just for younger girls and women competing for local crowns or Miss America. On July 27, a local resident of Woodhaven Manor in Demopolis will be competing against nine other competitors for the title of Ms. Alabama Nursing Home. The winner of the pageant will serve as a spokesperson for nursing home residents and the Alabama Nursing Home Association (ANHA). Earlier this year, Sylvia Holland earned the title of Ms. Woodhaven Manor by competing in the facility’s local pageant. “I am excited and honored to have made it this far,” Holland said.
Holland, who is 87, is one of the 10 finalists competing for the title. Holland qualified for the finals when she competed against 62 other contestants during preliminary judging in Montgomery. The contestants are evaluated on their outlook on life, personality, poise, and involvement in their nursing homes.
Holland is known around Woodhaven Manor for the arts and crafts she creates. “I didn’t start getting involved in arts and crafts until I came to the home,” Holland said. She has made more than 45 doll houses for which she has donated to residents, staff members, and foster children in the community. Her doll houses are created from cardboard boxes, magazine clippings, scrap fabric, and lots of glue. Each house comes with furniture made by Holland and has its own personality.
Holland also makes paper flowers from tissue paper and dyed coffee filters. She has also became a very good watercolor painter. She enjoys giving her creations away to the residents and workers at the home.
“Art is good therapy. I enjoy connecting with the people who drop by to get my paintings. I am not a great artist. I believe people are just amazed an 82-year-old woman is able to this. I am learning to be an artist,” she said.
When Holland isn’t working on her arts and crafts, she may be found participating in church services and offering assistance to her fellow nursing home residents. Holland and her husband, Earl, were married for 40 years. She has six children, six grandchildren and nine great-grandchildren.
Workers at Woodhaven Manor said Holland is a joy to have in the community and that she brings a smile to everyone’s face.
“I love being here at Woodhaven Manor. It’s my home away from home. There is a great staff. There are a lot of homes to consider when choosing one, but this is one of the best,” Holland said.
ANHA president Richard Brockman said, “Each lady is a wonderful ambassador for her nursing home and Alabama’s long term care profession. The Ms. Alabama Nursing Home Pageant is a celebration of life and the contributions nursing home residents make to their communities. Each of these contestants captures that spirit.”
The Ms. Alabama Nursing Home Pageant will be held at the Hyatt Regency Birmingham-the Wynfrey Hotel in Hoover on Monday, July 27, at 2 p.m. Admission is free and the public is invited to attend. 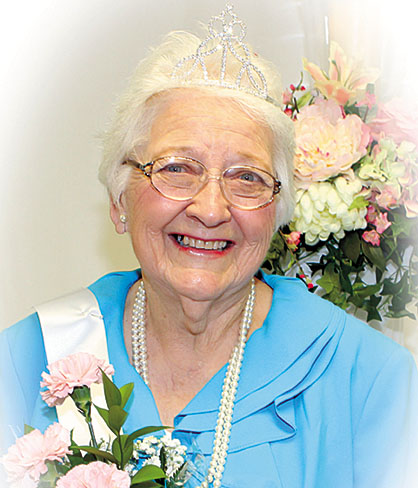 Sylvia Holland is among the top 10 finalists for Ms. Alabama Nursing Home. Holland is a resident of Woodhaven Manor in Demopolis.