Board selects Kallhoff for superintendent 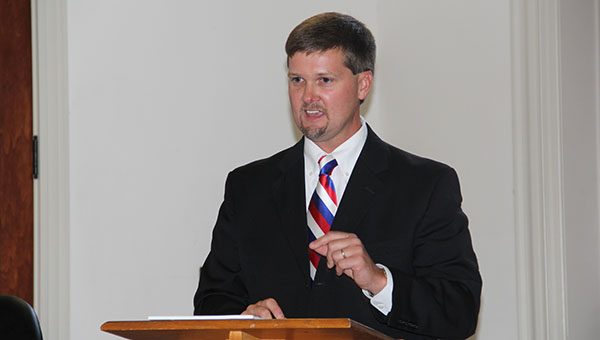 The Demopolis Board of Education announced Monday that it will extend a contract offer to Kyle Kallhoff to be the system’s next superintendent.

After a months-long search process, the Demopolis Board of Education announced Monday that it would be extending a contract offer to Kyle Kallhoff as the next superintendent of schools.
Kallhoff was among five finalists who interviewed with the board last week. The board was initially scheduled to name the final two candidates during a special-called meeting Monday, but instead agreed unanimously to extend a contract offer to Kallhoff.
Kallhoff currently serves as the superintendent of Chickasaw City Schools and is a resident of Mobile. He has also served as technology trainer at Software Technology, Inc., was assistant superintendent and director of instruction at Clarke County Schools, was assistant superintendent at Fairfield City Schools in South Carolina and served as a testing and data specialist with Mobile County Schools. He holds a master’s degree in special education from the University of South Alabama.
School Board Chairman Conrad Murdoch said Kallhoff possesses many of the attributes that the board seeking for the position.
“He presented a lot of new and innovative ideas. The board felt he had the prior experience and demonstrated a lot of the leadership qualities that we were looking for in a superintendent,” Murdoch said.
Murdoch said Kallhoff presented goals that matched those of the board.
“His goals include maintaining high standards for teachers and students while providing systems of support when needed and to provide a safe environment that is conducive for learning,” he said.
The board will now begin contract negotiations with Kallhoff.
“I thank the board, the community and local leaders for their time and support throughout this process,” Murdoch added.