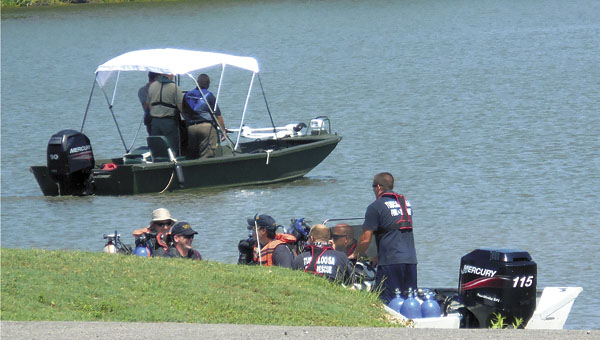 Members of the Tuscaloosa Fire and Water Rescue team leave from the Demopolis landing Sunday in search of a woman who went missing Saturday night on the Black Warrior River. The body was recovered Sunday afternoon.

The body of a drowning victim was pulled from the Black Warrior River Sunday afternoon following a search that began the previous night.
Virginia Wright Williamson, 36, of Meridian, Mississippi went missing at about 8:30 p.m. Saturday after entering the water from a pontoon boat. A search was focused in the area of Cypress Cove in Greene County. State troopers assigned to the Alabama Law Enforcement Agency’s Marine Patrol Division and divers with the Tuscaloosa Fire Department found Williamson’s body Sunday at approximately 1:37 p.m.
According to officials with the Alabama Law Enforcement Agency, witnesses at the scene said Williamson began to struggle in the water and went under. She was not wearing a personal floatation device, according to ALEA.
Greene County Coroner Ronald Smith reported the cause of death as drowning. No autopsy was performed.
The initial call went to the Greene County Sheriff’s Office.
On Sunday morning, at approximately 8 a.m., the Demopolis Police Department was called in to assist in the search, according to DPD Chief Tommie Reese. The DPD provided its mobile command post as a staging area used to help coordinate resources for the search.
“We were willing to help in the search any way we could. Our department is very sorry to the family for their loss and just pray that God gives them the strength to get through this,” Reese said.
Williamson is reported to be the daughter of Lauderdale County, Mississippi Circuit Judge Lester Williamson. Funeral services are planned for Thursday, July 30 in Meridian.
Among the agencies involved in the search was the ALEA Marine Police, Alabama State Troopers, Green County Sheriff’s Office, Tuscaloosa County Sheriff’s Office dive team, Marengo County Rescue Squad, the Choctaw County Sheriff’s Office, and the Demopolis Police Department.
No further information was provided as troopers from the Marine Patrol continue to investigate the incident.