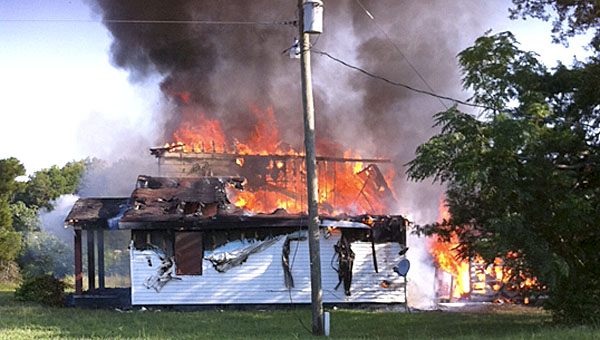 Witnesses said they saw sparks from a power line at the back corner of this house about the time it caught fire on Sunday, July 26.

Demopolis firefighters worked the scene of a house fire on Sunday, July 26, and a co-owner of the property said she saw sparks flying from the back corner prior to seeing flames.
According to officials with the Demopolis Fire Department, their office received a 911 call at approximately 7:45 a.m. regarding a two-story structure fire at 507 Russell Drive. Battalion Chief Talmus Williams said the fire was about 45 percent involved when firefighters arrived on the scene. The department responded to the scene with three department engines and knocked the blaze down in about one hour. Crews remained on the scene for approximately three hours.
The house was vacant at the time of the fire and no injuries were reported. Williams described the house as a total loss and that an investigation could not determine the cause of the fire.
One of the property owners, Rosa Young, who lives next door and was planning to repair and move into the home that burned, said her cousin knocked on her door and she saw sparks coming from an electrical line at the back corner of the home and the start of the fire.
“We tried to get our hose to put it out, but it wouldn’t reach that far,” Young said.
Young said after seeing the sparks, the fire grew quickly, igniting a shed that stands about 10 feet from the home.

For more details on this story and others, see the Saturday, August 1, print edition of the Demopolis Times.