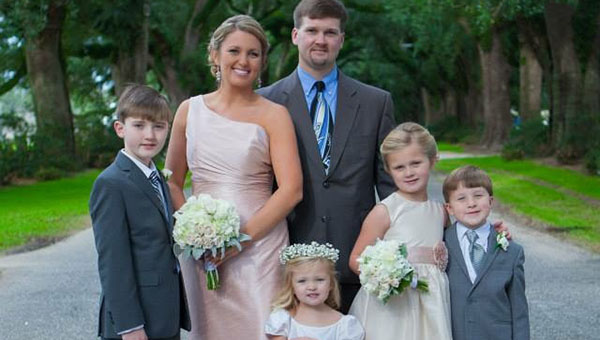 New Demopolis Superintendent Kyle Kallhoff with his family: wife, Kristina, and children, Carson, 11; KaraLynn, 8; John Curtis, 5; and Anna Claire, 3. The family is preparing for their move to Demopolis.

Things are moving at a very quick pace for the Kallhoff family as they prepare for their new life in Demopolis.
Kyle Kallhoff was named the Demopolis Board of Education’s choice as the system’s next superintendent. This week, the school board and Kallhoff signed a contract and on Thursday night the Chickasaw City School System released him from his current contract. Kallhoff will remain with that school system for another week assisting an interim superintendent.
Kallhoff said he was with his wife, Kristina, when he received news that he was selected by the Demopolis BOE to be superintendent.
“I was with my wife sitting at the dining room table, actually. I feel truly honored to be selected and my family is excited to join the Demopolis community. I’m very anxious to get up there and ready to get started,” he said.
Kristina Kallhoff is also an educator and has been working the past few years as a consultant for a testing company. She also works as a supervisor for student-teachers with the University of Mobile and at a Methodist church preschool.
“She’s a teacher by trade and by heart,” Kallhoff said. “She’s a stay-at-home mom with four children and three jobs … I’m lucky to have her.”
Kallhoff’s children will be enrolling in Demopolis schools, perhaps by the second quarter as the family works on moving and selling their home. Kallhoff is the father of four: Carson, 11, going into the sixth grade; KaraLynn, 8, going into the third grade; John Curtis, 5, going into kindergarten; and their youngest is 3-year-old Anna Claire.
Despite the timing of being late summer and school about to start, Kallhoff said it will be important to make sound decisions.
“We have to do everything right. It just so happens all of this is happening in July. It will be tough on us as a family, but that only makes us stronger,” he said.
Kallhoff said he is bringing a personal philosophy that the student always comes first.
“Schools are built for students,” he said. “The number one factor in all the decisions I make centers around what is best for students. I don’t accept the status quo. Doing things the same way may be the easy thing for adults, but it may not be the best thing for the kids.”
He said it is important for a school system to be open to change and finding new ways of getting things done.
“As educators we are always looking for alternatives and new support systems for helping students get over the hump,” he said.
When asked why he wanted to be the superintendent in Demopolis, Kallhoff said it was an easy decision … once he did some homework.
“My family and I actually spent a Saturday in Demopolis. We had heard of Demopolis and had driven through, but it was important for us to spend some time there. We saw the park and recreation areas, the public library and had a picnic at the park by the river. We watched a boats and barges go by and our children played with some other children there for an hour. When we left that day we knew (Demopolis) was it. The next day I began the application process,” he said. “The tour (with school board members during the interview process) only solidified what I already knew.”
As for the schools, Kallhoff said he is impressed with the technology already on the campuses and the support from the community.
“The school system is very impressive, not just for a superintendent, but anyone looking to move to the area,” he said. “There is so much technology already available in all the classrooms and as of the end of the 2014 fiscal year there were three months of (financial) reserves. The support of the community is evident in the success of the education foundation. That is a partnership any superintendent would want to capitalize on,” Kallhoff said.
The new superintendent also said he looks forward to working with partners such as the University of West Alabama and Shelton State Community College in moving forward on a career tech center.
One of the top priorities for Kallhoff coming in is to get to know the teachers and staff.
“I met and heard from a lot of the teachers during my visit and I can tell there are great teachers there,” he said. “It is important that teacher morale is up. Morale impacts test scores, discipline; I want to make sure they are happy and that they know they are valued.”
Kallhoff said he intends to be in Demopolis for teacher institute day, which is August 10, and will be here for the first day of school on August 13. He begins working full-time on August 17.
“The folks in Demopolis are hungry to have one of the top 10 school systems in the state and I’m looking forward to helping them get there,” he said.
For those wondering, Kallhoff said an easy way to remember how to pronounce his last name, it is the same as the beginning of the word cauliflower (caulif).

For this story and others, see the Saturday, August 1, print edition of the Demopolis Times.