Tangle ‘back home’ as DHS principal 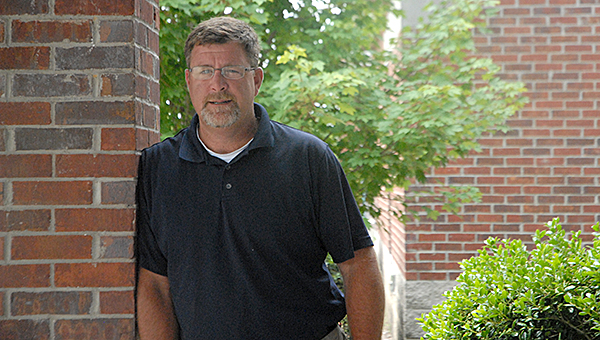 Christopher Tangle has returned to Demopolis City Schools as the new principal at the high school.

As time passes, home can mean multiple things. Home can be considered where a person grew up, where a person currently resides, or even the location in which a person works. For new Demopolis High School Principal Christopher Tangle, home is in the office he always wanted to occupy.
“I told my wife I’ve always wanted this job and if it ever presented itself again, I’m going to apply for it,” said Tangle.
Tangle may be new to the job at DHS, but he is not new to the area. Tangle served in multiple roles for the Demopolis City School system including as principle of Demopolis Middle School. He believes his previous experience with the system and even some current students that will be upperclassmen this year will aide in his transition.
“They know what to expect and what I expect of them,” Tangle said. “They know my type of discipline and how I expect them to be leaders and not followers.”
Along with instituting has brand of fair and consistent discipline, Tangle has other goals he’d like to accomplish, especially academically.
“We’re going to focus on our test scores,” he said. “The sophomores and juniors are going to take the ACT Aspire for the first time and we’re putting a ton of emphasis and focus on making sure that the students are prepared for that test.”
When Tangle was at DMS, the school had students take the Alabama Reading and Mathematics Test (ARMT). He plans to use past tests like the ARMT to evaluate students to see if they are in the correct classes and help them reach their full potential.
Tangle wants to make sure that Demopolis is viewed as the top school in the area and attract the best students around. Currently, DHS has about 720 students in attendance, but Tangle hopes to increase that number to 750 or 760 by this time next year.
Another goal of the new principal is to get teachers more involved in decision making and planning. To do this, Tangle will re-institute a committee system that will allow faculty to help plan events and make decisions. Tangle said he believes that doing this will help be a morale builder for his staff.
While Demopolis has been home for quite some time, Tangle is originally a native of Vance, Alabama. He spent his preparatory years at Brookwood High School. After graduation, Tangle attended two years of military school before arriving at the University of West Alabama and joining the UWA baseball team.
Tangle served as the principle at Thompson High School for a year before returning to Demopolis and served a position in Saraland several years prior. Being at Thompson, a school with over 1,800 students, Tangle did not get to know all of his students. However, with the number of students at Demopolis being less than half that number, Tangle said he will have the chance to get to know the students on an individual basis. He said that will allow students to know his expectations and his personality.
“That all ties together,” Tangle said. “It helps our students, teachers and athletics, which are gong to be good this year. There’s been a lot of change, but I believe it’s good change. ”
With school about to start, Tangle can feel the anticipation in the air for the upcoming school year.
“It’s an exciting time here in Demopolis,” he said. “We all normally dread the first day of school, but I think everyone is anxious to get started this year.”
Tangle is looking to be consistent and fair. He believes that being fair and balanced across the board will help grow the relationship between the new administration and students.
“Generally students want structure and discipline. They’re not going to ask you for it, but they do want it,” he said.
Along with his wife, Michelle; son, Hunter; and daughter, Kelsey, Tangle is back in Demopolis and said he is happy for the chance to return.
“I am very thankful and blessed that the Demopolis City Schools Board of Education has given me the opportunity to come back and lead DHS,” he said.