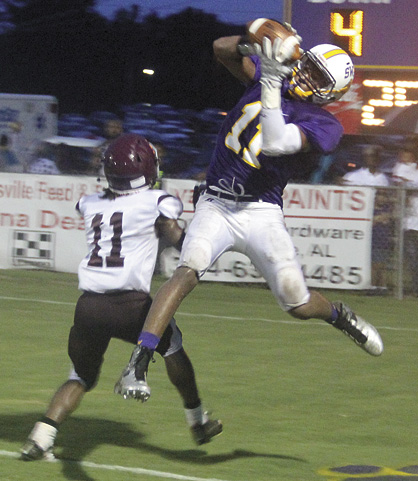 Sweet Water’s Will Huckabee hauls in a pass from quarterback Branson Davis as he drifts into the endzone for the Bulldogs’ only score in their season opener Friday night.

It couldn’t have been the season opener that Head Coach Pat Thompson and his Sweet Water Bulldogs were looking for when they hosted 4A Thomasville Friday night. The Bulldogs fell behind early and never quite found their footing falling by a final score of 34-6.
The Thomasville Tigers hit their stride early driving the football 60 yards to the endzone. Runningback Byron Jose made up much of that yardage with a few runs, including one of 28 yards.
On the other side, the Thomasville defense kept Sweet Water from doing much on offense. The Bulldogs went three-and-out on their first two possessions.
Thomasville, on the other hand, scored touchdown on each of its first three possessions, building a 21-0 lead with 3:30 left to go in the first quarter.
The Bulldog offense came to life on its third possession. After a short gain from the 35-yard line by Eric Jenkins, the next play resulted in a roughing-the-passer penalty, advancing Sweet Water to midfield. On second-and-12, Jenkins found a hold and exploded for a 12-yard gain to the 37. After consecutive 6-yard runs by Jaylin Johnson, a penalty backed the Bulldogs back to the 34. On the first play of the second quarter, Jenkins hit a 10-yard run. A few plays later, facing a fourth-and-9, Davis found receiver Will Huckabee in the endzone to get on the board. The PAT was no good as Thomasville held a 21-6 edge.
The defense stepped up on its next chance forcing the Tigers to punt.
The Bulldogs were on their own 27 and came up just inches shy of a first down. With his team down, Thompson decided to go for the first down, but the Tiger defense held strong, giving their offense great field possession.
It took only one snap as the Tigers hit a hole in the middle of the line and kept going into the endzone to increase their lead to 28-6, following a successful PAT.
The Tigers would add one more score mid-way through the third. A missed PAT made the score 34-6.