A suspect has been arrested for allegedly breaking into the Demopolis Police Department’s substation at Vowell’s Market. 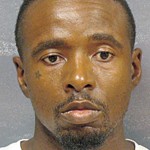 Antonio Larrenzo Murray, 31, of Columbus, Mississippi is facing charges of third degree burglary stemming from the incident.
According to a DPD press release, Murray was employed by a cleaning crew that was performing after-hour cleanup at Vowell’s when he allegedly broke into the substation. DPD Chief Tommie Reese said Murray entered the substation through the ceiling.
“It never ceases to amaze me the things that people try to do,” Reese said.