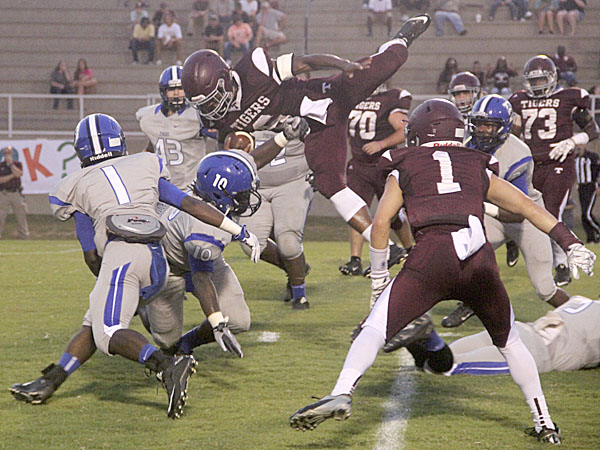 The Demopolis defense upended Thomasville most of the night and was able to make key plays when the opposition threatened.

It was a tough battle through one half of play when the Demopolis Tigers met the Thomasville Tigers Friday night, but Demopolis, with a strong running game and some key plays on defense, pulled away in the second half to bring home a 27-0 opening game victory and the first for head coach Stacy Luker as a Tiger.
The Demopolis Tigers’ flexed its defense muscle for much of the game and even when Thomasville made its way into scoring position Demopolis defenders made key plays that led to turnovers in securing the shutout.
On offense, DHS wore down the opposing offense with a solid running attack behind Jayjerein Craig, Drew Jones, and Keishaun Scott. Craig led the group with 141 yards on the ground, including a 43-yard scamper and an 8-yard touchdown run. Jones earned 36 yards on the ground, including a 19-yard touchdown run and was quarterback Jamarcus Ezell’s favorite target passing, catching five passes for 67 yards, including a 13-yard touchdown. Scott gained some tough yards on the ground down the stretch and ended the game with 35 yards.
Ezell completed the night passing going 5 for 9 with 67 yards and a touchdown.
Luker said overall he was pleased with the way his team played.
“It was ugly in the first half, but they showed their resiliency in the second half. We challenged them at the half and they accepted the challenge and rose to the occasion. We were very physical in our running game and the offensive line played very well. And, we had no turnovers, which is always a positive thing,” Luker said.
After exchanging a possession each, Demopolis began its second possession with good field position at midfield. On second down, Ezell found Jones for a 16-yard gain on a play the Tigers would go back to on several occasions, including just a few plays later when it went for 19 yards to the 4-yard line. Two plays later, Ezell would carry the ball into the endzone from a yard out. The PAT by R.J. Cox was good, giving Demopolis a 7-0 lead.
Thomasville would follow with a drive of their own, but a fumble ended the drive at the 7-yard line.
Demopolis would follow by driving the ball back down the field to the 20-yard line where the drive stalled and Thomasville took over on downs as the game would go into halftime.
Thomasville would fumble again on its first possession of the second half with Rahmeel Cook falling on it for Demopolis.
Later in the third, Demopolis would take possession at their own 42 and on the first play Craig took the handoff for a 43-yard gain to the 15. On third down, Ezell once again found Jones who would go 13 yards for the score, giving the Tigers a 14-0 lead after Cox’s successful PAT.
The following series of plays helped put away Thomasville when on their first play the ball was bobbled with Khyrim Bryan falling on it for Demopolis at the Thomasville 19-yard line. The very next play saw a handoff to Jones who hit a hole and covered the yardage to the endzone. The PAT was no good, but Demopolis held a 20-0 edge with 4:33 to go in the third.
Thomasville would threaten to score again, but this time an interception by Matt Beckum at the 8-yard line ended their chance to get on the board.
The fourth belonged to Demopolis as they used their power running game to wear down the opposing Tigers. A steady mixture of Craig, Jones and Scott not only took Demopolis downfield, but also ate up most of the clock. A 75-yard drive ended with an 8-yard touchdown run by Craig with only 1:33 to go. The PAT by Cox was good, leading to Demopolis’ 27-0 victory and a 1-0 start to the season.
The loss gives Thomasville a 1-1 record after an opening-season victory last week against Sweet Water.