Montgomery, Ala.: Few states have as fascinating a political history as Alabama,
especially in the post-World War II era. Moving onto and off the state’s electoral stage
during this period of remarkable transformation have been some of the most interesting
figures in 20th-century American government and politics. Now, the backstage intrigue
of Alabama politics receives a lively treatment in Of Goats & Governors, the highspirited
new memoir by former Alabama representative Steve Flowers.

Some politicians—like George Wallace, Big Jim Folsom, Lister Hill, Frank M. Johnson Jr., or Howell Heflin—became national figures and shaped the state’s image, for better or worse. Others—like Rankin Fite, Roger Bedford, Paul Hubbert, Bill Baxley, or John
Patterson—have been known mostly in Alabama but have had an equally profound
impact on the state. Swirling around all these elected officials in the Heart of Dixie are
stories, legends, and jokes that are told and retold by political insiders.

There could be no better guide to this colorful history than Steve Flowers. Former
Alabama Attorney General and Lieutenant Governor Bill Baxley says, “Steve Flowers
has become our state’s leading political columnist and commentator. Of Goats &
Governors is delightful. Some of the stories are new to me. All are humorous or
interesting.”

Steve Flowers served in the Alabama House of Representatives from 1982-1998. He is
today Alabama’s most watched and read political columnist and commentator. He
writes a weekly syndicated column and has a weekly Alabama Public Radio show. He
has also served as an political analyst for ABC, CBS, PBS and the BBC.
Of Goats & Governors is available through your favorite local or online retailer, or from
NewSouth Books, 334-834-3556, www.newsouthbooks.com/ofgoatsandgovernors.
ISBN: 978-1-60306-364-7; Trade Cloth; 288 pages; $ 29.95 ebook ISBN: 978-1-60306-365-4.

He will visit the Demopolis Public Library to sell and sign copies of his book on Wednesday, September 9 from 1:30-3:30 p.m. 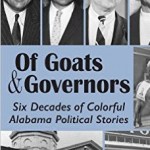 Flowers will be in town to sign copies of his book “Of Goats and Governors.”