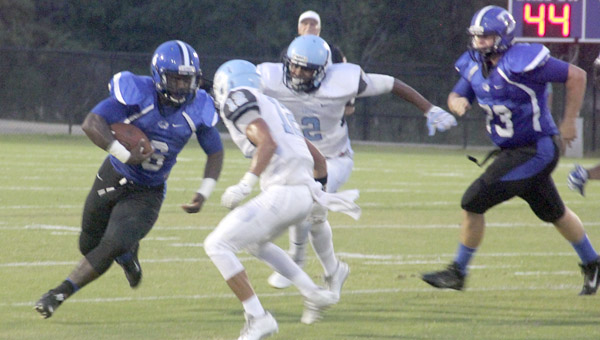 Demopolis junior runningback Jayjerein Craig had a huge night for the Tigers, rushing for 216 yards on 31 carries.

In their first game last week, the Demopolis Tigers featured a steady diet of its three-headed monster running out of the backfield, and they did the same in their home debut Friday night. But, it was Jayjerein Craig who stole the show.
The Tiger coaching staff kept going with the hot junior runningback as he had a total of 31 carries, finishing the night with 216 yards and accounting for four of the team’s five touchdowns.
“I just asked him today if he had ever run for 200 yards and he said ‘no.’ He ran hard tonight. But, we want to give credit where credit is due. Our line did an exceptional job and all of our backs ran physical. I think we wore (Calera) down,” said DHS Head Coach Stacy Luker.
The game was a big one for the Tigers. It was the first region game of the season and was a matchup of two top 10 5A schools with Demopolis ranked tenth and Calera eighth in the state. It also marked Luker’s first home game as the Tiger head coach.
“It was a good region win for us. I’m very proud of the way the team played tonight,” Luker said.
The victory gives Demopolis a 2-0 overall record and is 1-0 in region play. The Tigers take to the road to face region opponent Jemison next week.

For more details see the Saturday, Sept. 5, print edition of the Demopolis Times.