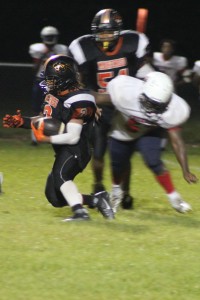 Alphonzo Lewis helped lead the Marengo Panthers to a region victory against Chickasaw Friday night by scoring the go-ahead touchdown late in the fourth quarter.

It wasn’t always pretty, but when it mattered the most the Marengo Panthers made the plays — both on offense and defense — to earn an important region victory over the Chickasaw Chiefs, 28-21.
In a game marred with penalties by both teams, Marengo managed to overcome setbacks to score late in the fourth quarter to go ahead of the Chiefs and the defense stepped up to hold off Chickasaw’s attempt at a last-minute score.
Marengo feel behind early in the game as the Chiefs broke a huge run for 84 yards on the first play of their second possession. The point-after game Chickasaw a 7-0 lead with 3:34 to go in the first quarter.
The Panthers took the next kickoff and set up at the 23-yard line. Alphonzo Lewis, who had a solid night out of the backfield, was moving the ball early in the drive with consecutive runs totaling 13 yards. Quarterback Cordarius Pritchett found Deangelo Crispin for a 14-yard gain, crossing midfield to the 45-yard line. On the next play, Pritchett called his own number for a big gain of 16 yards and followed a few plays later with another 8-yard gain to the 27-yard line. A series of penalties against the Panthers hurt down the stretch, but they also were aided by a personal foul against Chickasaw. From the 14-yard line, a dropped pass in the end zone was followed by a delay of game penalty. Facing a fourth down and 19 to go, Pritchett scrambled around until he found Michael Kennedy in the end zone for the touchdown. A 2-point conversion attempt was not successful as Chickasaw maintained a slim edge, 7-6, with 9:10 to go in the half.
Chickasaw extended its lead with a quick scoring drive after a good return to midfield on the kickoff. This time the PAT was no good, but the Chiefs held a 13-6 lead that they would carry into the second half.
The Panthers wasted little time in the second half getting back on the board. Tyler Smith would lead the drive, gaining 35 yards on three carries. It was Roosevelt Thompson who carried the ball in from the 4-yard line for the touchdown. A 2-point conversion pass was good as Marengo took its first lead of the game, 14-13 with 8:07 to in the third.
Marengo got the ball right back after recovering a fumble. Lewis made a series of big plays totaling 36 yards on the drive, helping lead the Panthers down field to the 12-yard line. From there, Pritchett found Crispin at the side of the end zone to extend the Panthers’ lead to 20-13. A 2-point conversion attempt failed.
The Chiefs began the fourth driving the ball downfield and scoring on a 15-yard run for a touchdown. A 2-point conversion gave Chickasaw a 21-19 edge with 8:56 to go in the game.
Needing a score, the Panthers failed on a fourth down attempt on its next series. But, the Panthers’ defense stepped up with a big tackle behind the line of scrimmage by Quindarius Ausborn and on fourth down the Chiefs failed to convert.
Starting at the 38-yard line with just over 3 minutes to go, Smith and Lewis took turns carrying the ball. At the 25, Smith picked up 13, setting Marengo up at the 8-yard line. Lewis got the call next, hitting a hole and finishing the drive with about 44 seconds to go. Pritchett ran the ball in on a 2-point conversion, giving Marengo a 28-21 lead.
After a short kick, the Chiefs looked for a big play downfield, but the Panther defense stood strong as the game expired.
With the victory, Marengo is 2-1 overall and 2-0 in region play. The team travels to Millry for another region contest on Friday, Sept. 18.