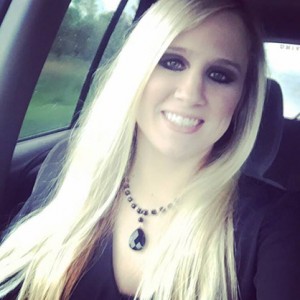 Rebecca Henderson Paulk has been missing since Monday, Sept. 7. A reward of $5,000 is being offered for information leading to her location.

The parents of a 26-year-old Marengo County woman who went missing last week are still awaiting a call that that they hope will lead to her whereabouts.
Rebecca Henderson Paulk, 26, a resident of Linden and graduate of Demopolis High School, was reported missing last week. Her parents, Wes and Janet Henderson of Demopolis, said they last spoke to their daughter at 5 p.m. on Monday, Sept. 7. The parents are offering a $5,000 reward for any information leading to the location of their daughter.
Paulk had been in Meridian that Monday. On Tuesday, Sept. 8, officials in Lauderdale County, Mississippi found Paulk’s vehicle stuck in a ditch on a rural road, near a Whynot, Mississippi racetrack. According to Wes Henderson, valuable items were found inside the vehicle, including medicine, her purse, and an iPad and laptop computer. Her cell phone was not in the vehicle.
The Lauderdale County Sheriff’s Office has been working the missing persons report and utilized dogs and drones to search the area where Paulk’s vehicle was found.
“It’s been eight days and we have not heard a word from her,” Wes Henderson said. “We haven’t even had many leads. If anybody has any information please call the Lauderdale County Sheriff’s Office. Tips can be anonymous. We need to find her and know that she is safe.”
Wes Henderson added that he don’t know why his daughter would have been in the area where her car was located and that she has never been gone lengths of time without staying in contact with him or her mother.
Paulk is a white female with blond hair, 5 feet-6 inches tall, and weighs approximately 145 pounds.
“We don’t have a lot to go on. We processed her vehicle on Tuesday (Sept. 8) and so far we found no signs of foul play, but we still haven’t been able to locate her,” said LCSO Chief Deputy Ward Calhoun.
Anyone with information on Paulk’s location is asked to call the Lauderdale County Sheriff’s Office at 601-486-4952.
Volunteers in Demopolis are organizing a “Prayer in the Square” candlelight vigil in honor of Paulk to be held Thursday, Sept. 17, at 7 p.m.