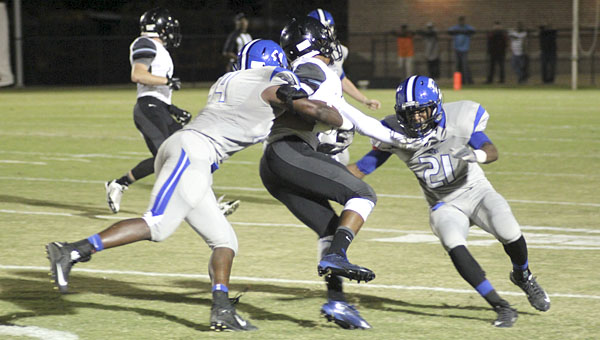 Points were tough to come by early when the unbeaten Demopolis Tigers and Helena Huskies met with each team hoping to get an upper hand in region play. But, ultimately the Tigers outpaced the Huskies pulling away late, securing a 28-6 win.
Demopolis used its brutal running attack to amass 344 total rushing yards, led by Jayjerein Craig with 161 yards with two touchdowns.
For the Huskies, yards were hard to come by as attempts to get something going in the passing game came up flat, going 0-13 before completing its first pass well into the game.
While the Huskies offense may have struggled, their defense was also tough for the Tigers early on with a lot of hard hits and tough play in the trenches.
“I think they outplayed us for about two and a half quarters,” said DHS Head Coach Stacy Luker. “They were a little more physical than we were, but I think we began to wear them down. We weren’t always good, but a lot of that had to do with how good of a team they have.”
Demopolis had a chance to get on the with its first possession, but an R.J. Cox field goal attempt was no good.
The two teams exchanged positions throughout the first quarter, primarily going three-and-out each time.
With a little over a minute to go in the first, a pair of 11-yard runs by Keishaun Scott and Drew Jones took the Tigers to their own 34-yard line as the quarter drew to a close. Scott picked up in the second quarter with a pair of runs for 17 yards across midfield to the 49. A few plays later, Marcus Ezell, who had a good night passing, hit Jones for an 11-yard gain to the 28. The Tigers leaned on Craig the rest of the way until he scored on a 3-yard run, giving the Tigers its first lead and Cox’s PAT was good for a 7-0 lead.
After getting a first down on Helena’s next possession, a series of incomplete passes led to a great punt that pinned the Tigers back at the 3-yard line.
Demopolis would drive the ball down to the Husky 12, but a low kick was blocked by Helena keeping them within one score at the half.
The Huskies came out on defense and on the second play forced a fumble from Craig that gave them possession at their own 42-yard line. A sack by Rahmeel Cook backed the Huskies up. But, on the next play, Riley Davis found Phildon Dublin for a 33-yard gain and first down. On the nest play Devan Walker found a hole for 18 yards and the touchdown. The PAT was no good, but the Huskies had cut the lead to 7-6 with 9:28 in the third.
The Tigers bounced back with a 66-yard drive led by Craig. On the Huskies’ side of the field, Jacob Rodrigues preserved the drive for the Tigers by falling on a fumble. From the 7, Ezell hit Jones for the score. Cox’s PAT made the score 14-6.
The Tigers kept the momentum going moving into the fourth quarter. Craig once again led the charge, including a big 52-yard run into the red zone. Scott picked up another first down on consecutive runs and Craig finished the drive with a 5-yard run. The PAT made the score 21-6 with 7:57 to go in the game.
Demopolis would add one more score and take most of the time of the clock on its next possession capped by a 3-yard run by Scott and the PAT by Cox.
The Tigers will play out of region next week, but face a tough challenge when they host the state’s top-ranked 5A school, Jackson. Demopolis was ranked sixth going into Friday’s contest against Helena.