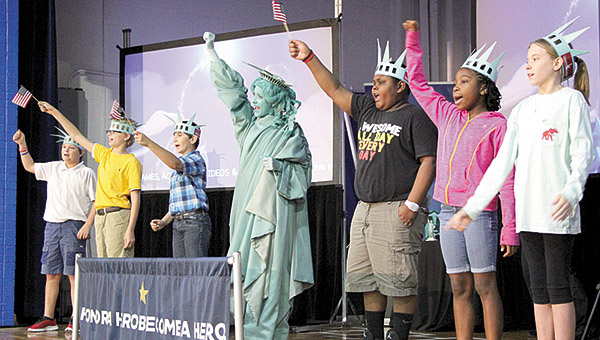 The excitement almost could not be contained at U.S. Jones Elementary School Tuesday morning when a very special guest visited the school to kick off a program that has become very popular with students.
The Liberty Learning Foundation kicked off its Super Citizen Program at U.S. Jones. The program is designed to engage students in learning crucial lessons in civics, character, financial responsibility, career building and the “Great American Story.” The 10-week program involves students participating in Torch Teams that will nominate and vote on people within their community to honor as great Americans.
Being the third year the school has participating in the program, those returning to the school this year were on edge to see the most popular guest involved in the program — Libby Liberty. Libby, a living replica of the Statue of Liberty, introduces the program and leads the student body in a song that the returning students knew well from previous school years.
“We provide a civics education course, but it is more like an experience for the students,” said Becky Saunders, regional development director for the Liberty Learning Foundation. “Our goal is to teach, inspire, and empower the next great generation of Americans.”
The program will be incorporated into classrooms through vocabulary, discussions and other curriculum.
“This program explains how we became a country; it’s something they don’t fully understand until we go through this program. Ultimately, they realize that they have a role as a citizen to maintain what others have started,” said U.S. Jones fifth grade teacher Dana Hill.
One of the more enjoyable parts of the program for the students is recognizing those within the communities as “Great Americans” and presenting those community members with replica Statues of Liberty during a special program on Dec. 1.
“Students enjoy the process of recognizing heroes in their own family and community. The students will nominate someone they feel is a great American and they have to give examples as to why they feel that way. Each class will make nominations and then vote on just one,” Hill said.
The Liberty Learning Foundation program is being utilized in 200 schools across Alabama, impacting about 42,000 students, according to Saunders.
The program is free to the school as it is paid for through grants and donations to the Liberty Learning Foundation. Part of Tuesday’s program was recognizing local sponsors that include: Johnny Johnston, Ameriprise Financial; Manley, Traeger, Perry & Stapp; Lloyd & Dinning, LLC; Robertson Banking Company; Demopolis Rotary Club; Marengo Insurance; Batter Up Sports Grill; and Holiday Cleaners and Suds.