DHS brings down Falcons at homecoming 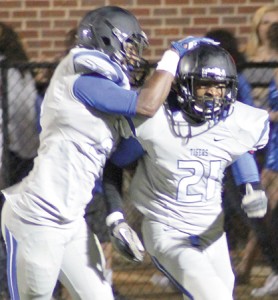 Demopolis celebrates an interception returned for a touchdown by A.J. Collier (26). He had two pick-sixes in the game.

The Demopolis Tigers appeared to be clicking on all cylinders Friday night on their way to a homecoming win over Tuscaloosa-Central, 42-6.
With the win, Demopolis has clinched at least the second seed and will host at least one playoff game. With a win over Wilcox-Central next week, the Tigers could clinch the region championship.
Several stars shined for the Tigers. Quarterback Jamarcus Ezell had a strong night, especially running the ball.
On defense, A.J. Collier made two huge interceptions, both of which he returned for touchdowns. The first was a 63-yard return in the first quarter and the second was a 68-yarder in the fourth quarter.
Rahmeel Cook also had a solid night on defense, recording two sacks and recovering a fumble.
After forcing a punt on Tuscaloosa-Central’s first possession of the game, the Tigers took possession at the 34-yard line. Drew Jones got the first carry of the game and picked up 9 yards and consecutive runs by Keishaun Scott netted 9 yards. Jones took the next handoff for a big run of about 30 yards and a personal foul at the tail of the play set Demopolis up at the 15-yard line. A few plays later, Jayjerein Craig went into the endzone from the 5-yard line. R.J. Cox’s point-after attempt was successful, giving the Tigers a 7-0 lead early.
On the ensuing kickoff Anthony Jackson made a solid play on special teams, keeping the return short and down at the 24. The Falcons were moving the ball well on the drive, but Cook came up with a fumble to give the Tigers possession at the 20.
Demopolis’s next possession ended with a turnover when they came up just short on a fourth-and-third conversion attempt.
The Falcons were moving the ball a bit on the next drive, but consecutive penalties killed the momentum and a desperation thrown on second-and-30 was picked off by Collier and returned to give the Tigers a 13-0 lead. Cox made the PAT to make the score 14-0 with 37 seconds to go in the first.
After holding the Falcons, the Tigers ran a mix of Craig, Jones and Ezell and it was Ezell who capped off the drive with a 7-yard run. This time the point-after was no good as Demopolis took a 20-0 lead.
The Falcons struck quick on the kick-off as Kendrell Walker took the ball 85 yards to get TCHS on the board. The kick was no good, making the score 20-6 with 9:05 to go in the half.
Later in the half, from the 50-yard line, Ezell took the ball for 29-yard run to the 21. Jones followed with a 21-yard run untouched into the endzone. The Tigers went for a 2-point conversion with Keishaun Scott running it in to make the score 28-6, which would be the halftime score.
Neither team would score in the third, but the Tigers began a drive about mid-way through the period that seemed to put the Falcons away for good. The drive began on their own 1-yard line and didn’t end until the first play of the fourth quarter when Ezell choose to take the ball himself on the option for an 8-yard run into the endzone. Cox’s PAT was good, giving the Tigers a 35-6 lead at 11:53 to go.
Following Cook’s second sack of the night, Collier pulled down his second interception that he returned 68 yards for another score, leading to the Tigers’ 42-6 lead.
The Falcons made one last play late in the game to make the final 42-12.
The Tigers will travel to Wilcox Central next week with a chance to clinch the Region 4 title.