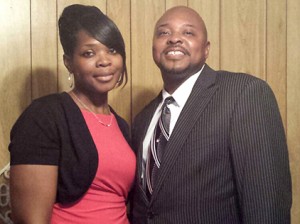 LaKendra Shawntae Brown and Reginald Dwyane Hawkins, both of Demopolis, will be exchanging vows during a planned event in October.
The bride-to-be is the daughter of Mr. and Mrs. George and Diane Brown of Demopolis. She is the grandchild of the late Paul and Beatrice Smith and the late Pearline Daniels Brown and George Brown Sr.
LaKendra is a 1998 graduate of Eastside High School and DeKalb Technical College in Covington, Georgia. She is currently employed with NPC of Demopolis.
The groom-elect is the son of Sara Hawkins and Lawrence Grover. He is the grandchild of the late Williedell “Book” Hawkins and Archie Hawkins.
Reginald is a 1991 graduate of Demopolis High School and TTC of Lebanon, Tennessee. He is current self-employed as an owner-operator.
The couple plan to exchange vows at The Wedding Place in Las Vegas, Nevada on Oct. 29, 2015 at noon.