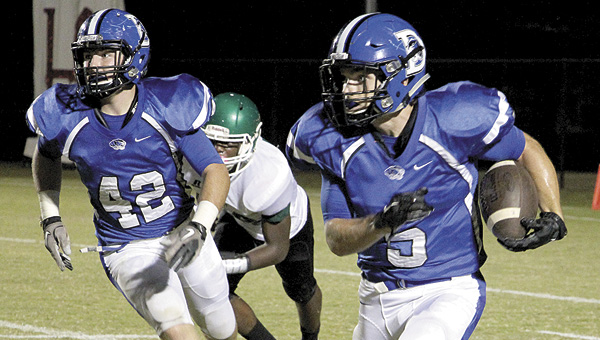 It was a defensive battle throughout he first half when the Demopolis Tigers hosted the Dallas County Hornets, but it was the Tigers that got things going in a big way, scoring six touchdowns in the second half to secure a perfect region record, 41-0.

For the Tigers (8-1, 7-0), the victory means another perfect season in region play. The loss for Dallas County puts them at 5-4 overall and 4-3 in the region.

DHS Head Coach Stacy Luker commended his players for turning things around in the second half.

“The blocked better and executed better overall,” Luker said. “I’m very proud of the way we played in the second half. We were a much better football team those last 24 minutes.”

The motivation for the team was securing that perfect region record.

“We didn’t want to be a one-loss region champion. They played hard for to make sure that didn’t happen,” Luker said.

For more details see the Saturday, Oct. 24, print edition of the Demopolis Times.