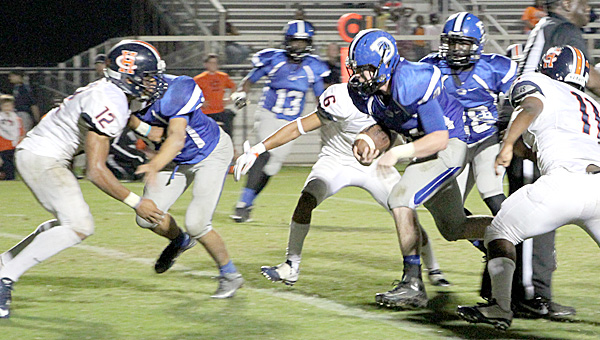 The Demopolis Tigers overcame a shaky start in the first round of the state playoffs Thursday nighThe Demopolis Tigers overcame a shaky start in the first round of the state playoffs Thursday night only to play almost flawlessy in the second half to advance after defeating Charles Henderson High School, 48-13.
Demopolis and Head Coach Stacy Luker used its familiar formula to wear down the visiting Trojans — wearing down the opposing defense with a bruising running game behind their deep stable of backs. Jay Craig led the offense, rushing for 217 yards on 26 carries with two touchdowns. Keishaun Scott also had a spectacular night for the Tigers, gaining 100 yards and a touchdown on only 13 carries. Drew Jones also played a key role, picking up tough yards up the middle and scoring a touchdown. William Wilkins, a junior, and A.J. Jackson, a sophomore, also broke through for touchdowns late in the game.
The defense, which was put in some tough situations in the first half, shut down the Trojans in the second half. Rahmeel Cook was all over the field and making plays, he led the unit with five solo tackles, two assists, a sack and deflected two CHHS pass attempts.
The game remained close through the first half as Demopolis made key mistakes, including a turnover deep in their own territory and penalties. Through the first half, the Tigers were hit with nine penalties for 100 yards. As a comparison, in the second half they were flagged once for 15 yards.