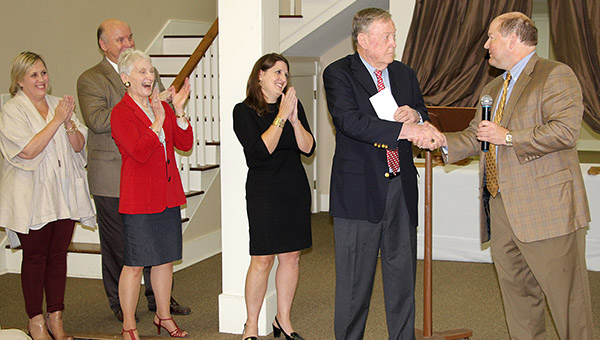 There were cheers and even tears of joy Thursday night when those involved with the Demopolis City Schools Foundation learned that a surprise donation had been made to put the organization’s endowment fund over the $1 million plateau.
At the beginning of the day, the DCSF’s endowment fund stood at $982,000. But, during the organization’s annual awards banquet held at the Coplin Building in downtown Demopolis, representatives of the Alabama Power Foundation presented a donation of $25,000, taking the total to $1.007 million.
“This is a great time to be in Demopolis,” said DCSF Executive Director Amanda Barnes. “There are not many, if any, cities the size of Demopolis that can say they have a $1 million endowment for their schools. It shows how much our community cares about its schools.
“This goal has been 22 years in the making and we are thrilled to have reached it with the help of Alabama Power,” said Amanda Barnes, Executive Director for the Demopolis City Schools Foundation. “With the support of the Alabama Power Foundation and other community members, we are able to continue to create an environment that promotes excellence in education.”
For those long involved with the foundation, Thursday night’s announcement was a reminder of the years of hard work by so many who wanted to improve education in Demopolis.
Hugh Lloyd, one of the founders of the foundation and its president from its inception in 1993 until his death in 2008, had established what he coined as the “hallelujah goal,” which was hitting the $1 million mark in the foundation’s endowment fund.
The foundation operates two funds — an annual membership fund and the endowment fund. The annual fund is used to provide annual teacher grants and for operations costs. But, the endowment was established for long-term growth, being set aside and accruing interest. But, hitting the $1 million mark will allow the foundation to utilize those earnings through the foundation’s grant programs.
According to Paul Miller, DCSF grants chairman, over $60,000 in classroom grants were awarded during the 2014-15 school year. DCSF Endowment Chair said with the new funding from the endowment program, an additional $20,000 to $30,000 could be made available for those grants annually.
The foundation’s origins can be traced back to the Alabama Power Foundation. When local officials were building the new high school, a shortfall in funding was discovered. In the process of working through that problem, Lloyd discovered a special Alabama Power program that provided seed money to communities for the purpose of establishing school foundations.
At the celebration, Mark Crews, Vice President of Alabama Power’s Western Division, and Diane Brooker, manager of Alabama Power’s Demopolis business office, honored John Cox Webb IV for his service to the Alabama Power board of directors by presenting the grant to the Foundation.
“The Demopolis community’s commitment to education is evident through the continued success of the Demopolis City Schools Foundation,” said Crews. “After John Cox’s retirement, we couldn’t think of a better way to thank and honor him than by giving to an organization that means so much to this community.”
Each year, the Alabama Power Foundation awards more than 1,000 grants, using non-ratepayer money. Since it was founded in 1989 with an investment by Alabama Power shareholders, the foundation has given more than $140 million through more than 20,000 grants and scholarships. Its current assets exceed $140 million, making it one of the largest corporate foundations in the state. For more information about the Alabama Power Foundation and other Alabama Power community programs, please visit www.powerofgood.com.
Prior to the surprise donation, the foundation recognized many of those who have given over the past year.
“This has been a very successful year, thanks to all of you. We provided over $60,000 in classroom grants and saw significant growth in our endowment fund,” said DCSF President Sarah Chandler Hallmark.
Those recognized as Executive donors were Georgia Pacific, Parr’s Chevron, and WestRock.
Patron donors were Mark Abrams, Alabama Power Company-Greene County Steam Plant, CEMEX Southeast, Jackson-Newell Foundation, Claud and Cindy Neilson, Louise Webb Reynolds, Robertson Banking Company, Rotary Club of Demopolis, State Farm-Kris Mullins, Trustmark, and John Cox Webb IV.
Partner donors included: J.D. and Amanda Barnes, Thomas and Alice Boggs, Billy and Betsy Coplin, Demopolis Area Business Council, Luke and Sarah Chandler Hallmark, Jere Levy, Marengo Insurance Agency, Dick and Jan McDonald, Kris and Donald Mullins, Frank and Lucette Osborne, Ronnie and Robin O’Neal, John and Mary Rutledge, Tony and Terri Speegle, and Roger and Carolyn Willis.
2015 Endowment donors were also recognized.
Named endowments included: Foster Farms; Amanda Barnes, given by John C. Webb III and Marie Suttle Webb Foundation; Peter Michael Reynolds, given by John C. Webb III and Marie Suttle Webb Foundation; and Kayte and Thomas Melton, given by Dan and Vickie Wilson.
Endowment support donors included: J.R. Rivas, Bill and Catherine Meador, Demopolis High School and Demopolsi Academy 1970’s Reunion Group, Bill Horton and Judilyn Brooks, John and Nancy Northcutt, Angela Northcutt Hollifield, and William and Katheryn Cunningham.