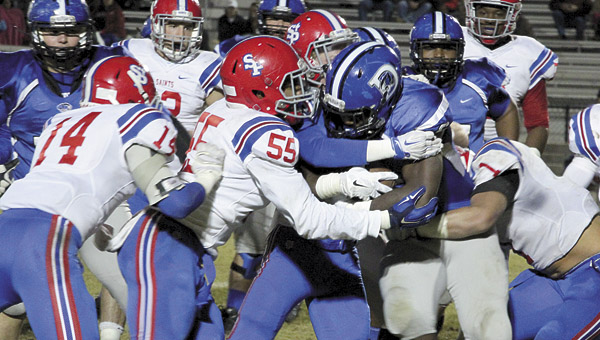 Jay Craig attempts to pick up yardage against the St. Paul’s defense in the third round of the 5A state playoffs Friday. The Saints’ defense held the powerful Demopolis running game in check most of the night.

Those who have watched the Demopolis Tigers this season got used to seeing certain things, perhaps most of which was a bruising running game that wore down defenses and led to time-consuming scores. That did not happen Friday night when the St. Paul’s Saints ended the Tigers’ run in the state playoffs, 35-13.
The Saints jumped out to a 14-0 lead, but the Tiger defense held them in check through the third quarter. The Tigers got on the board early in the fourth, cutting the lead to 14-7. But, that’s as close as it got as St. Paul’s scored two times to put the game away.
Demopolis had its lowest rushing totals of the season, gaining only 118 yards on 31 carries. Jay Craig led the ground attack with 68 yards on 11 carries and scored one of the Tigers’ touchdowns.
Jamarcus Ezell went 8-for-16 passing for a total of 99 yards.
In all, the Tiger offense was held to 217 yards while the Saints gained 323 yards, including 239 yards rushing.
Leading the Tiger defense was Rahmeel Cook who had five solo tackles and six assists. Marcus Wright had six solo tackles and two assists while R.J. Cox had two solo tackles and three assists.
Tiger Head Coach Stacy Luker, in his first season at Demopolis, said the Saints never allowed his team to get into its typical offensive groove.
“They outplayed us in every aspect of the game,” Luker said. “We didn’t get very many snaps in the first half and we weren’t able to get in sync, but you have to credit them for that. They’re an outstanding team.”
Luker added that his team continued to fight and showed resiliency throughout the season.
“Coming into this season I thought we had a hard-working team that was willing to fight … they didn’t let me down. This is a great group of guys,” he said.

For more details see the Saturday, Nov. 21, print edition of the Demopolis Times.