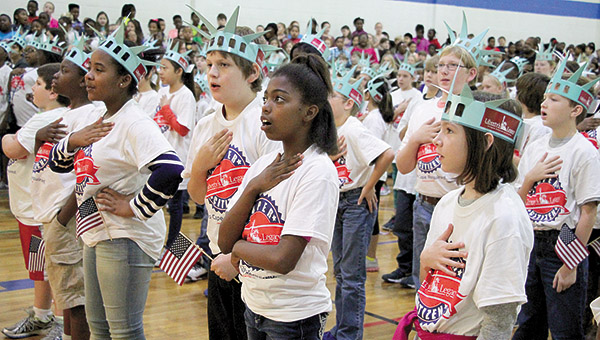 (Editor’s Note: This article originally published in the Wednesday, Dec. 2, 2015 print edition of the Demopolis Times.)

The gym at U.S. Jones was the site of a special celebration Tuesday morning when fifth grade students earned their “Super Citizen” graduation certificates and honored those they chose as local heroes.
The Liberty Learning Foundation kicked off its Super Citizen Program at U.S. Jones in early October. The program is designed to engage students in learning crucial lessons in civics, character, financial responsibility, career building and the “Great American Story.” The 10-week program involves students participating in Torch Teams that will nominate and vote on people within their community to honor as great Americans.The graduation ceremony brings the program full circle with members of the school’s “Torch Teams” voting on nominees to be recognized as local heroes.
“The Super Citizen Program talks about what it takes for these students to become Super Citizens, but one of the best ways to learn those lessons is by learning about and honoring real life American heroes that they know. We believe when you honor a hero, you become a hero,” said Kristen Sharp of the Liberty Learning Foundation.
The students recognized six community members as heroes. Those torch team members who nominated the heroes introduced each who were then presented with a replica Statue of Liberty award.
The first award was presented by student Zander Croston, who introduced hero Paul Croston. Montgomery Freeman introduced his Torch Team Hero, Jennifer Helms, who volunteers her time in the classroom. Ben Tuberville introduced his team’s hero, Jay Russell, who Tuberville said not only gives back as a teacher, but also teaches important life lessons through his martial arts classes. Samiya Lucas presented the hero award to Antwanique Alston. Torneshia Williams recognized Tavares Griffin, a volunteer firefighter. Josh Holley introduced his team’s hero, Laura Holley, a teacher at U.S. Jones.
Following the hero awards presentation, the members of the fifth grade were presented with special certificates for completing the Super Citizen program and they recited a pledge together as a reminder of the things they have learned and what it takes to become the “Next Great Americans.”
The program is free to the school as it is paid for through grants and donations to the Liberty Learning Foundation. Local donors, referred to collectively as the “Demopolis City Alliance,” includes Alabama Power Service Organization; Ameriprise Financial; Demopolis Rotary Club; Holiday Cleaners and Suds; John C. Webb III and Marie Suttle Webb Foundation; Johnny Johnston Jr.; Lloyd & Dinning LLC; Manley, Traeger, Perry and Strapp; Marengo Insurance Agency; Robertson Banking Company; and York Children’s Foundation.
This marked the third year that the Super Citizen Program has been integrated into the classrooms at U.S. Jones. The program is utilized in 200 schools across Alabama.