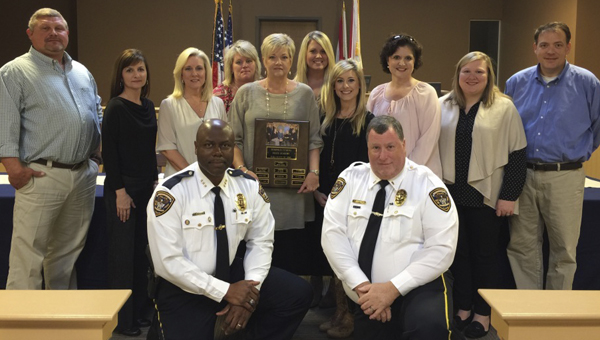 Demopolis Police Chief Tommie Reese and DPD Lt. Tim Sorenon with the latest group to graduate from Citizens Police Academy. The group was recognized during a special graduation ceremony held Sunday, Dec. 13 at the police department.

Ten local residents were recently recognized upon their completion of the latest Citizens Police Academy class hosted by the Demopolis Police Department.
The CPA program was initiated at the police department in 2010 when Chief Tommie Reese said he saw a need to bridge the gap between local law enforcement and the community.
“The Citizens Police Academy concept has enabled us to create and maintain an active community partnership and assist citizens in identifying and solving problems to improve the quality of lives in our neighborhoods while educating the public of all functions of the police department,” Reese said.
For eight weeks, members of the class met each Tuesday where members of the police department led classes designed to teach about various aspects of law enforcement and the local department. The class learned about the history of the department, self defense techniques, the operation of police vehicles and pursuit, the duties of the school resource officer, police ethics, DUI, domestic violence among others. The class also toured the police department, the local courtroom and the 911 center in Linden.
The class also received training through scenarios on crime scene investigations, pulling over vehicles when the members got behind the wheel of a police cruiser, and were put in situations where they had to decide when, or if, shooting their weapon was warranted.
Some of the members attended a special class at the shooting range where they were taught about gun safety.
Denise Cannon, who served as this session’s class president, said the class gave her a new perspective on what law enforcement officers go through on a daily basis.
“It was a lot of fun, but it was also an eye opener. It made me appreciate our officers, and the officers across the nation, even more for what they go through and the sacrifices the make for us and our families,” Cannon said.
Serving as guest speaker for the graduation was Marengo County Circuit Clerk Kenny Freeman, who completed the CPA class in a previous session.
“We see a lot of people today trying to make police out to be the bad guys. What you have done by attending this class is to educate yourself on the reality of police work and through that you are showing you want to be a good citizen,” Freeman said.
Mayor Mike Grayson told the class that by participating in the class they are making the community a better place.
“The difference between good communities and not-so-good communities is that in good communities people get involved. You willingness to get involved has made Demopolis a better place,” Grayson said.
Also participating in the ceremony was Lt. Tim Sorenon, who led the class each week, as well as Sgt. Monica Oliver and Canal Church of Christ Pastor Mike Swims, who Chief Reese said was recently certified as one of the department’s police chaplains.
Those who completed the CPA’s 2015-2 session were: Cannon, Kay Parten, vice-president; Lisa Moody, secretary; Kelsey Bozeman, treasurer; Waverly Bedsole; Robert Blankenship; Donnie Cannon; Erin Dixon; Heather Brown-Gibbs; and Jennifer Sager.
The members of the class will now join the CPA Alumni Association, which regularly takes on projects designed to support the police department. During the graduation ceremony, the alumni association presented a $2,250 donation to the department from its fundraising efforts.
The DPD will host its next CPA class in the spring and will announce registration information at a later date.