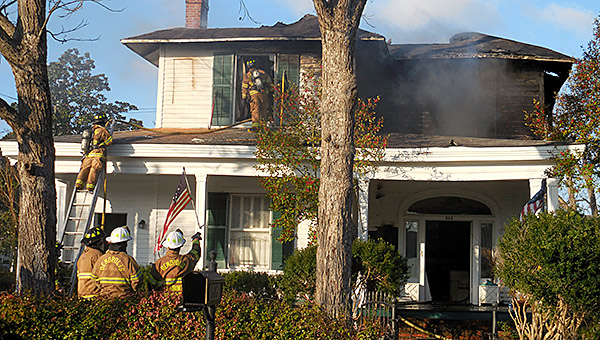 Demopolis firefighters work to extinguish flames emitting from the second floor and attic of a home on S. Commissioners Street early Monday morning. A family of seven escaped the fire with no injuries, according to officials.

A Demopolis family was forced from their home Monday morning when a fire consumed the second story of their historic home in the downtown area.
Demopolis firefighters responded to the fire on S. Commissioners Street at approximately 5:50 a.m. and arrived on the scene to heavy smoke and fire venting through the roof and second story windows. Fire officials said there was heavy fire on the second story and in the attic.
Officials said the last of the occupants was leaving the home as they arrived on the scene and that no one was injured. The residents of the home are Arthur and Elizabeth Ogden and their five children.
Friends of the family have been working to help fulfill emergency needs for the family, including clothes and food. Anyone wishing to donate gift cards for food may leave them at the front desk at the Best Western hotel or cash donations can be made at Sweet Water Bank in Demopolis.
The firefighters began working to extinguish the blaze from the outside utilizing two engines and a ladder truck.
The home, known to locals as the Perrett House as it was once the home of a local doctor by that name, is over 100 years old and is marked as an historic structure.
DFD Battalion Chief James Bailey said the cause of the fire is being categorized as “undetermined after investigation.”

For more details see the Wednesday, Jan. 6, print edition of the Demopolis Times.