Student writers to be featured in symposium 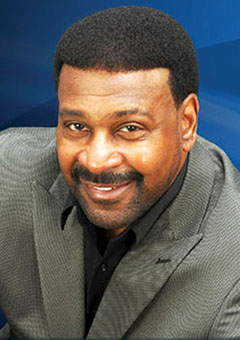 Robert Little, author and motivational speaker, will be the keynote speaker during the Demopolis Authors Showcase and Symposium on Monday, Jan. 25, at Demopolis High School.

The talents of student writers and discussions with professional writers will be the highlights of Demopolis City Schools’ Young Authors Showcase and Symposium.
The event, sponsored by the Demopolis PTA and the Demopolis Public Library, will be held on Monday, Jan. 25, from 5 to 7:30 p.m. at Demopolis High School. The works of students from all four Demopolis schools — at least two from each grade — will be on display and the writers themselves will be on hand to share their thoughts on their work.
There will also be a group of local authors on hand to share their books. Serving as the keynote speaker for the event will be author and motivational speaker Robert Little, whose latest book is titled “Dream Power.” According to his website, Little’s mission is to “inform, educate and enhance the personal and professional lives of his audiences.” He has made presentations at about 700 schools and his children’s books have selected for Accelerated Reading programs.
School officials said the idea for the symposium is part of an ongoing effort to focus on writing.
“Our teachers and students have been working hard on writing and this symposium offers an opportunity to showcase some of our schools’ more talented writers,” said Demopolis Superintendent Kyle Kallhoff. “We’ll have everything from kindergarteners’ stories to essays at the high school level.”
The event will begin in the DHS auditorium where the stage is set up similar to a television talk show. After a brief introduction by Kallhoff, a student will serve as the moderator of the event and the guest speaker and featured students will be on stage.
Little will spend much of the day in Demopolis, speaking with students during the day before speaking to the audience at the symposium in the evening. Following his speech, the event moves to the gymnasium where the students’ and local authors’ writings will be displayed.
“If you’ve ever been to an ‘art walk,’ this will be an ‘author’s walk,’” Kallhoff said.
Several groups have come together to make the symposium possible, including the PTA, Demopolis Public Librarian Morgan Allen, and the Two Rivers Arts Council, which has donated door prizes. The librarians at each of the schools played key roles in planning the event. But, according to Kallhoff, the event is “student-led” to a great extent.
“A lot of people have gotten involved and it is really coming together well,” Kallhoff said. “This is going to be a great opportunity to see our students’ creativity. They are very talented. They may not be scoring touchdowns or nailing three-pointers, but their talent is writing and we want to put them on display and celebrate their work.”
Students whose work will be featured include the following:
Westside Elementary — Addison Abrams, Jack Jackson, Liam Ward, Paige Williams, Madison Branch, Molly Stephens
U.S. Jones Elementary — Hillary Harrison, Anna Allgood, Jarell Waller, Charlie Grace Card, Sariah Smith, Tanner Wideman
Demopolis Middle School — Alesha Taylor, Avery Schumacher, Josie McAlpine, Tori Horne, Ashanti Bell, and Joseph Barnes
Demopolis High School — Nikita Branch, Mary Maddox Cook, Gabrielle Lynch, Casey Roberts, and Madeline Warren.
Guest authors attending the event will be Jason Smith, author of “Awakening;” Jessica Meigs, author of “The Becoming Series;” Erma Banks, author of “Fruit Cocktail;” Keri Riggins, author of “Hair Like Mine is One of a Kind;” and Sara Odom.
Serving as the moderator for the symposium will be Roderick Anderson.
The event is free and open to the public. There will be light refreshments provided by the DHS Culinary class and door prizes.