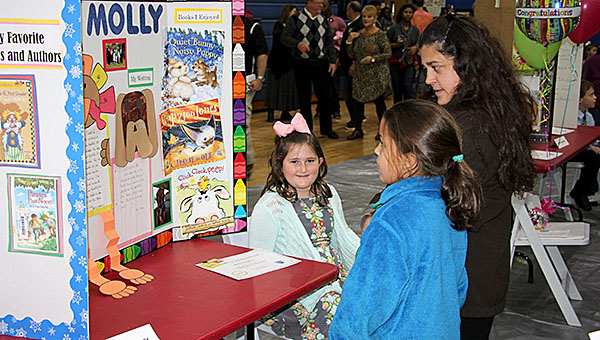 It was a night of celebrating the talents of student writers on Monday when school officials along with other organizations came together to host the first Young Authors Showcase and Symposium.
The symposium, held at Demopolis High School, featured the works of students from kindergarten through twelfth grades as well as other local writers. Robert Little, author and motivational speaker, addressed the audience in the DHS auditorium speaking about the need for students to believe in themselves and for parents to support them and be good examples.
“Students have to be willing to do their very best every single day in to be the person they want to be. There are things we have to do every single day to make it happen,” Little said. “There are times in your life when you have to do things whether you want to or not. Parents can help by inspiring and motivating their children.”
The event began with interviews of those students whose works were being featured. DHS student Roderick Anderson served as the moderator of the interviews, asking each writer a series of questions about writing.
Sponsors of the event included: Demopolis Board of Educatino, Demopolis Parent-Teacher Association, Demopolis Public Library, Two Rivers Arts Council, Demopolis City School Education Foundation, Sweet Water State Bank, CLASSWORKS, Burrow Book Service, DHS Tiger Arts Guild, DHS Culinary Arts Program, WES Library, U.S. Jones Library, DMS Library, and the DHS Library.

(For more details and photos see the Wednesday, Jan. 27, print edition of the Demopolis Times.)