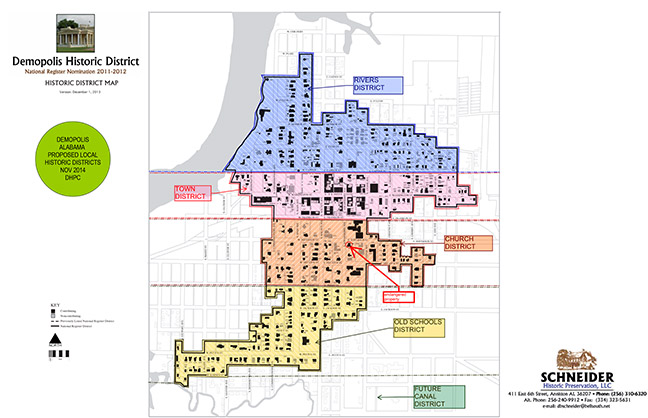 The Demopolis Historic Preservation Commission will be hosting a series of public meetings designed to get community feedback on its proposal for four historic districts within the city. The first of these meetings is upcoming with the date to be announced soon.
DHPC representatives said the goal in dividing the city into the four historic districts is to help preserve the city’s character and charm for generations to come. The commission proposed four districts will include property between the canal and the river, including what they have named the River District, Town District, Church District and the Old School District.
In time, the group hopes to identify at least one “endangered” property in each of the districts that would be saved and preserved, possibly for public use.
The meeting on Tuesday will focus on the Rivers District and the DHPC is asking residents of the neighborhood to attend the meeting. Meetings for the other three districts will follow in the coming months and will be announced. A large copy of the proposed district map can be seen at the Demopolis City Hall or the Demopolis Public Library.
The DHPC is looking to get the community’s input on the four proposed districts.
Efforts to preserve these areas come after the city’s National Historic District was expanded beyond downtown businesses. The designation, while notable, is honorary and would not include any guidelines on what homes and businesses can do to keep their historic appearance, according to the DHPC.
As part of expanding the city’s federal historic district, the commission had hundreds of properties individually surveyed by a consultant — a time consuming process, representatives said. The consultant, paid for with grants, looked at some of Demopolis’ nicer homes as well as others that are endangered of being dilapidaed .
“All properties are contributing structures,” said Shelley Wood of the DHPC. “They tell a story of what lives were like in Demopolis. It’s not just the best of the best houses that have our historic character — it’s a combination of all of them.”