Five inducted into Hall of Fame 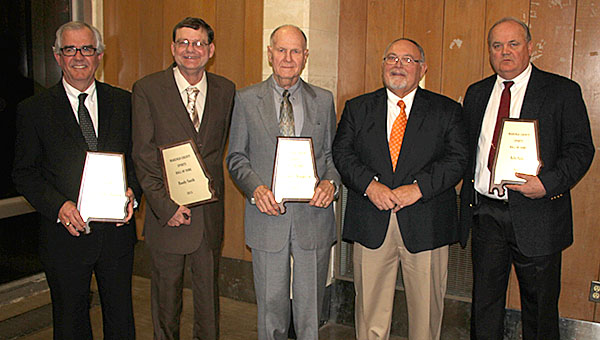 Five were inducted into the Marengo County Sports Hall of Fame during a special ceremony Monday evening at the Demopolis Civic Center. Members of the 2016 Hall of Fame class are, from left, Buddy Brackin, Randy Smith, Clarence Brooker Jr., Terry Barr, and Billy Fultz.

It was a night of celebration and reminiscing Monday when a large crowd filled the banquet room of the Demopolis Civic Center for the Eighth Annual Marengo County Sports Hall of Fame Banquet and Induction Ceremony.
The evening featured the induction of five new members to the hall of fame, including Terry Barr, Buddy Brackin, Clarence Brooker Jr., Billy Fultz and Randy Smith. The 1962 Linden High School State Championship football squad was also recognized with many members of that team in attendance.
The event opened with comments from Tom Boggs Jr., a member of the hall of fame’s board of directors.
“It’s always an honor to be in the midst of these legends from our part of the world. The men and women of the hall of fame have done great things on and off the field,” Boggs said.
Following a dinner, members of the 1962 Red Devil football squad were recognized followed by the presentation of this year’s MCSHOF Scholarship which went to Demopolis High School senior Hanna Malone. Malone is a standout softball player at DHS and will attend Mississippi State University in the fall. She was presented the scholarship by MCSHOF Secretary Tony Speegle.
During the induction ceremony, each inductee was presented plaques.
Bobby Barr, a member of the hall of fame as an all-state player for Linden who went on to play at Georgia Tech, presented his brother, Terry Barr, as a new member of the hall of fame.
Terry Barr was an all-state football player for Linden and earned a scholarship with Auburn. His athletic career ended as the result of an auto accident.
“At the time I thought it was a really tough blow, but I came home to Marengo County and that is all I ever wanted, to be able to live here,” Barr said.
Buddy Brackin was inducted by one of his high school teammates, Clifton McKnight, also a member of the MCSHOF.
Brackin lettered in football at Marengo County High School from 1964 through 1967 and was selected for the Blackbelt All-Star team as well as the 1A-2A All State team by the Birmingham News. He went on to earn a football scholarship to Marion Military Institute. He would also receive a scholarship to Troy University, but suffered a career-ending injury in his first game with the Trojans.
“We had a lot of great coaches, teachers and administrators in Thomaston,” Brackin said. “But, more than anything, it was our teammates. We grew up together and I couldn’t have asked to play with a better group of guys.”
Clarence Brooker Jr. was inducted into the hall of fame by his son, Johnny Brooker, who was an all-state player at DHS who also played at the University of Alabama, as well as being a charter director and co-founder of the MCSHOF.
Clarence Brooker lettered in three sports at DHS in the 1950s. He was offered a football scholarship to Alabama, but instead chose to sign a baseball scholarship out of high school. Over the next four years, Brooker played with a number of minor league clubs until 1959.
Clarence Brooker said the greatest gift that playing professional baseball gave him had nothing to do with balls, strikes or homeruns. It was being hit by a pitch and a broken nose that changed his life.
“It was in that hospital that I met a nurse (now Jackie Brooker). Baseball allowed me the opportunity to meet my wife that led to four sons, 12 grandchildren, and three great-granchildren,” he said. “I’m no hall of famer, I’m just a guy who loved to play ball.”
Inducting Billy Fultz into the hall of fame was his former professional baseball teammate, Barry Lyons, who played in the World Series as a member of the New York Mets.
Fultz was a three-sport letterman at Marengo Academy. After high school he signed a baseball scholarship to Livingston University and followed by signing with the New York Mets. He played in the Mets minor league system from 1982 through 1986.
“It’s an honor to be here, many of the players here tonight are icons and legends to my generation. It is overwhelming to be included with these guys,” Fultz said.
Randy Smith was inducted by his college baseball coach at the University of West Alabama, Hoss Bolin.
Smith was a three-sport letterman at Demopolis Academy and was the top pitcher for UWA for four years. He would start for UWA in the 1976 College World Series, posting a victory against the eventual national champions. He would continue in baseball as a successful high school coach, including winning three state championships.
“I look out and see many of my friends here and realize how blessed I am to have been raised here. I always say that I had the easy job … all I had to do was throw strikes. It was my teammates who made the plays,” Smith said.
Those chosen to the MCSHOF must be nominated prior to Oct. 11 each year. Members of the MCSHOF Board of Directors include: Tom Boggs, Tony Speegle, Johnny Brooker, Mike Grayson, Jim Stanford, Wade Drinkard, Edward Ward, Ann Yelverton, Wayne Lewis, Olen Kerby, Rob Pearson, and Johnnie Jones.
The hall of fame induction ceremony is held each year in February.