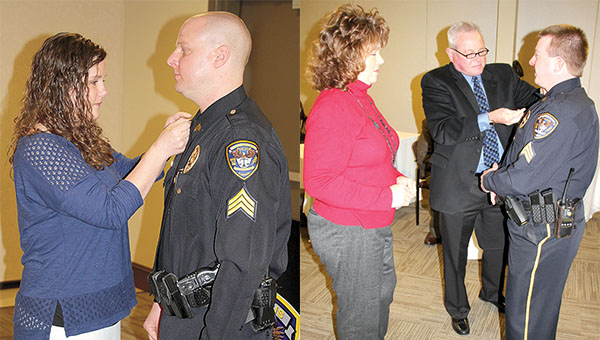 Members of the Demopolis Police Department and others joined together Monday for a special promotion ceremony for two of its own.
Cody Key and Darryl Reeves were the honorees who were each promoted to the rank of sergeant. Both officers were presented with a special plaque from DPD Chief Tommie Reese followed by the pinning of the sergeant strips by members of their families.
Reese said the ceremony was a celebration of the two men’s hard work and efforts that led to their promotion.
“These are two officers who have proven that they are worthy of this promotion,” Reese said. “They have worked hard during this process and I continue to expect big things from both of them.”
Sgt. Key has been a member of the DPD for eight years, serving as patrolman, ordinance enforcement officer, chief animal control officer, acting shift supervisor, as well as assisting the Criminal Investigations Division on investigations.
Key received his sergeant strips from his wife, Nicole. The couple have two children, Chloe and Jason.
Sgt. Reeves has been a member of the DPD since 2007, serving as patrolman, acting shift supervisor, crime scenes technician, and a SWAT team member/sniper. He is currently assigned to the Field Service Division and is a traffic homicide investigator and weapons armorer.
Reeves received his sergeant strips from his parents, Jody Allen and Stan Reeves. Sgt. Reeves has one son, Michael.
The ceremony included remarks from Demopolis Mayor Mike Grayson and DPD Chaplin Mike Swims provided the invocation.
“I have known these two men for many years and I’m very proud of the direction their careers have taken,” Grayson said. “Personally, I am very pleased with our police department. It is a case of quality over quantity, but I sincerely believe we have one of the premiere police departments around.”
Reese said he felt it is important to recognize local officers as they reach goals and exceed expectations.
“It used to be that departments just handed officers their strips and said ‘here you go,’ but I didn’t like that process. This is a time to celebrate these officers’ accomplishments alongside their family and fellow officers,” Reese said.
Key and Reeves each thanked those who were in attendance.
“I appreciate everyone who has supported me and for being here today,” Key said.
“(The promotion process) been a long road and I feel very honored today,” Reeves said. “I will keep moving forward and working hard to make our community a safer place.”