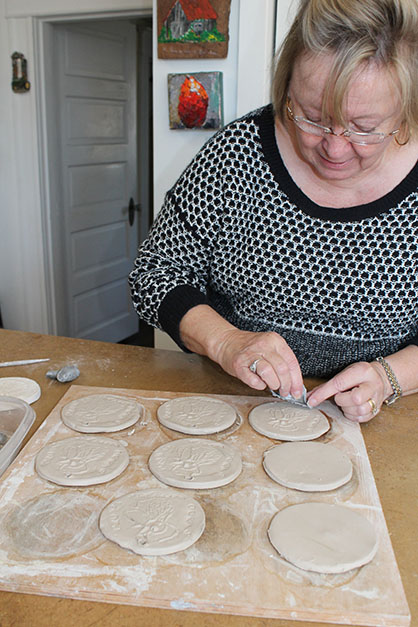 Carolyn Cowling, a potter, is creating special medals that will be presented to the winners of the Cock’s Crow Run to be held on April 9 as a kickoff to Rooster Day.

Lot’s of fairs and festivals start off with a 5K run.
Not all of them have roosters leading the pack.
The 5 kilometer race for Rooster Day April 9, called the Cock’s Crow Run, winds through the streets of historic downtown Demopolis. It will follow the same course as its big sister, the Jingle Bell Run held during Christmas on the River.
What makes this unique, however, is that racers will be trying to beat the “Lead Rooster.” Any racer who comes in ahead of the rooster will receive a special prize during award ceremonies in front of City Hall.
Cynthia Phillips, chairman of the race, will be among those trying to catch the lead. A runner for nine years, she already has two marathons and four half-marathons under her belt.
The lead rooster has been spotted training for the event and hopes to hit 19 minutes or better over the course.
Area cross country teams are looking to race, and runners from Mobile, Troy, Tuscaloosa, Meridian and Birmingham, as well as many local athletes, plan to take part.
One-of-a-kind medals created by local clay artist Carolyn Cowling will be presented to each of the place runners, and the University of West Alabama Department of Fine Arts is designing and making the special prizes for those who beat the lead rooster.
Cowling has challenged her Reading Club members to walk the course and receive one of her creations. Each medal will have an image of a rooster, the name of the race and date and will be stamped with either Cowling’s signature or mark.
They’ll make great Christmas tree ornaments, she laughed.
The first 100 runners to register will receive race bags with gifts from area businesses, and every runner will be eligible for door prizes, including $25 gas cards and gift certificates as well as rooster-themed items.
Phillips hopes some runner show up in rooster costumes, “anything to make it fun.”
The registration fee for the run is $20 by March 26 and $25 for late registration. T-shirts are guaranteed for those who register in advance and will be given to late registrants until supplies run out. Registration forms are available on the Rooster Day Facebook page RoosterDayDemopolis.
Registration begins at 8 a.m., with the start of the race at 9 a.m.