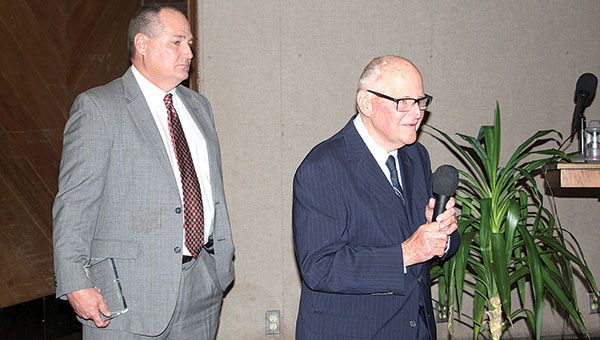 Tom Culpepper III, right, was the recipient of the Demopolis Area Chamber of Commerce’s annual Lifetime Achievement Award during the organization’s banquet held Thursday night at the Demopolis Civic Center. He was presented the award by his son, Tom Culpepper IV, left.

The Demopolis Area Chamber of Commerce celebrated its successes in 2015 and honored those who made it a banner year Thursday night during the organization’s 100th annual Chamber Banquet.
Guests of the event enjoyed a catered dinner and silent auction, but the highlight of the evening was the annual awards presentations.
The first award of the night was the Community Spirit Award which was presented to Katie Windham. Windham, an employee of Robertson Bank, was presented the award by Allen Bishop.
The Volunteer of the Year Award was presented to Jason Windham, owner of Suds and Batter Up. The award was presented by Demopolis Chamber Executive Director Ashley Coplin.
The 2015 Citizen of the Year Award was presented to Westside Elementary School Principal Tony Pittman. Pittman’s pastor and friend, Rev. Fred Moore, presented the award.
“(Pittman) is a principal, probably the greatest girls’ basketball coach Demopolis has ever had, he loves to fish and he’s an awesome friend. But, most of all he is a man of God and you can always depend on him,” Moore said in introducing Pittman.
The 2015 Business of the Year Award was presented to Personal Touch, owned by J.R. Reavis. The award was accepted by Debbie Murray.
Tom Culpepper IV had the distinction of recognizing the 2015 Lifetime Acheivement Award recipient, which was his father, Tom Culpepper III.
“It takes a special person to be a small business owner. I can’t think of anybody who better fits the description that than my dad,” Culpepper IV said.
In accepting, Culpepper III stated, “Demopolis was a wonderful town to grow up and live in. We should all be proud of it.”
The evening also served as the end of term for the chamber’s board of directors president. The 2015 board president, Aretha Muhammad, conducted the swearing in of this year’s president, Jacob Kerby.
Following the awards, Coplin addressed a few of the high points in the chamber’s 100 year history. She also recognized those committees and volunteers who worked with the chamber on events and programs in 2015 as well as this year’s Chamber of Commerce Ambassadors.
Entertainment for the event was provided by Toney Nixon.