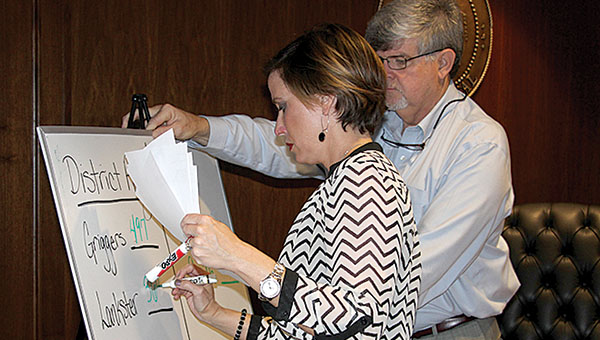 Greg Griggers held off challenger Barrown Lankster in Tuesday’s primary election to hold the seat as district attorney of the 17th Judicial Circuit, which includes Marengo, Sumter and Greene counties.
According to reports, Griggers finished the evening with 54 percent of the vote across the three counties to Lankster’s 46 percent in the Democrat primary race for district attorney. There is no Republican seeking the seat.
In Marengo County, unofficial results with 23 precincts reported had Griggers taking 3,618 votes (61 percent) to Lankster’s 2,293 votes (39 percent).
The only other local race to appear on the primary ballot was a seat for the Marengo County Board of Education, District 3. Also on the Democrat ticket, Rayvell Smith won the primary with 710 votes to Clifton McKnight’s 493 votes.
A total of 7,587 ballots were cast in the primary within Marengo County. The vast majority of which voted a Democrat ticket. Of those casting a primary ballot, 6,453 (85 percent) voted a Democrat ticket to only 1,082 voting a Republican ticket (14 percent).
In the primary election for the president, those in Marengo County voting Democrat chose Hillary Clinton with 3,590 votes to Bernie Sanders’ 1,092. There were also 622 “uncommitted” voters.
On the Republican side, Donald Trump took the most votes in Marengo County with 580 for 54 percent. Ted Cruz placed second with 228 votes and Marco Rubio placed third with 127 votes. Ben Carson finished fourth in Marengo County with 85 votes.
A total of 7,587 people voted in Tuesday’s primary election in Marengo County.