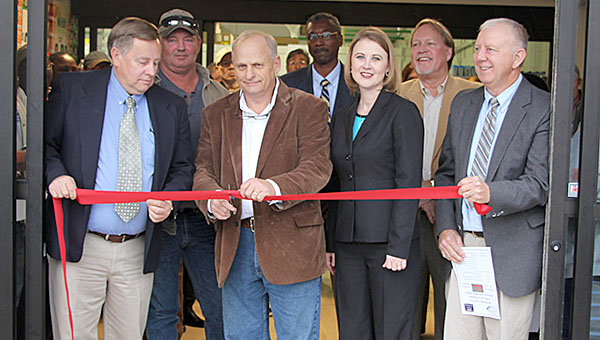 Residents of Thomaston has cause to celebrate Wednesday morning when Dave’s Market opened its doors to customers for the first time. The grocery store fills a longtime need in that community, which had been determined a “food desert” by the United States Department of Agriculture.
Officials representing the Town of Thomaston, Marengo County, as well as regional and state agencies were on hand for an official ribbon cutting event at 7:30 a.m. to welcome Dave’s Market to the community. There were many residents on hand also, ready to shop for fresh produce and meats in their own hometown for the first time in many years.
Dave Oliver, owner of Dave’s Market, cut the ribbon after more than seven months of reconstructing the old Marengo County School gymnasium into a grocery store.
“There is no way to explain the excitement we all feel,” said Thomaston Mayor Jeff Laduron. “We can’t thank Mr. Oliver enough for having faith in Thomaston. Not only has he eliminated our town as a food desert, but he has saved a building that many of our residents remember fondly. He is a Thomaston hero.”
Prior to the beginning of the project, the old gymnasium that is now a new grocery store had no roof and was described as a “jungle” inside due to the growth of trees and other vegetation. Laduron admitted that at one point in the city’s recent past, the building was “on our radar to be torn down.”
For Thomaston, the new grocery store will save residents from having to drive to other communities while allowing the town to collect new tax revenues that will be used for public services.
“In the spring of 2012, I met with the mayor of Thomaston and many leaders of the town and they had one vision and one request: For their citizens to have access to the basic necessities of life, such as fresh fruit, fresh meat, milk and bread,” said Brenda Tuck, executive director of the Marengo County Economic Development Authority. “Thomaston is a town classified by the USDA Rural Development as a food desert … a town at least 10 miles from fresh foods. The town is also part of the USDA’s Strikeforce Zone and part of the Delta Regional Authority. All of this means that Thomaston is a small, rural, disadvantaged town in a disadvantaged region. But, that did not stop this town from dreaming, strategically planning and most of all believing that they could make something happen if they all continued to work together.
“There was a spirit of unity here — a united vision and dedication — to this mission that is beyond any I have ever witnessed before in my 15 years in economic and community development.”
Oliver had been looking for a place to expand his Dave’s Market grocery stores and after looking at several sites, was told about the building owned by the city and what it would mean to the people of Thomaston if it could be saved. To get the store ready, Oliver has invested approximately $1 million into the facility, according to Tuck, and other funding was made available through grants from the USDA-RD, ADECA, Alabama Tombigbee Regional Commission and the Department of Rural Development. CSX contributed, providing produce coolers. The Marengo County Commission and Engineer also assisted the town by assisting with work on the property.
“The public investment in the infrastructure represents only 20 percent or less of the total investment here. That’s a great return that will continue to provide economic benefits to Thomaston and Marengo County for years and decades to come,” Tuck said.
Oliver introduced the store’s manager, John Standbridge, adding that he is excited to be opening in the community.
“We are very happy to be in Thomaston,” he said. “Brenda and Jeff did everything they said they would do and the project manager, Jerry Atchison, did a great job. Everyone came together and got it done.”
The last grocery store in Thomaston was River’s Cash and Carry, which was said to have closed about 30 years ago.
“This is going to be so much more convenient,” said Cindy Laduron, wife of the mayor who works fulltime as a bank manager in the town. “I used to have to drive to either Linden or Demopolis after work, so this is going to make things much easier.”
Rosie Rutledge, another Thomaston resident, agreed.
“Things are going to be much easier now that I won’t have to drive so far to get groceries,” Rutledge said.
In addition to the new Dave’s Market, Oliver has also invested in a new restaurant, D&R Restaurant, inside the Rural Heritage Center in Thomaston. The restaurant opened in late 2015.