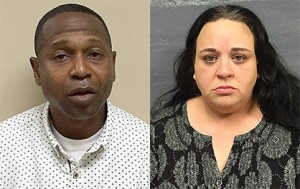 Melvin Todd Hathorn and Brandi Leigh Hathorn were each arrested on charges related to identity theft after a tip from a local church.

A tip from a local church led to the arrest of two suspects who allegedly were attempting to cash counterfeit checks in Marengo County last week.
Melvin Todd Hathorn, 51, of Bassfield, Mississippi was arrested and charged with two counts of criminal possession of a forged instrument, using a false identity to avoid prosecution, and trafficking stolen identifications.
A second suspect, Brandi Leigh Hathorn, 36, of Buckauttana, Mississippi was charged with two counts of possession of a forged instrument and one count of trafficking in stolen identifications.
According to officials with the Demopolis Police Department, a call was received from a local church on Friday, March 18, stating that someone was attempting to cash a counterfeit check. While investigators contacted a bank to obtain a photo identification of the suspect, it was learned that the subject was in attempting to cash another check at a bank in Linden.
The DPD contacted the Linden Police Department to search for the suspects. The DPD sent units to Hwy. 43 South, Jefferson Road and Hwy. 80 West at State Hwy. 28 in the case the suspects attempted to leave the area.
A Demopolis officer at Hwy. 80 and State Hwy. 28 spotted the vehicle and made a traffic stop. According to DPD officials, the driver provided the officer with a fake name and identification. Police said consent was given to search the vehicle and a preliminary search led to the discovery of numerous counterfeit identifications, check, a laptop computer, printers and hard drives.
At that time Hathorn and Hawthorne were both arrested and charged. Both were transported to the Marengo County Detention Center.
DPD Chief Tommie Reese applauded the efforts of the department’s Criminal Investigation Division as well as the patrol officers involved.
“Whenever you take advantage of people’s kindness, in this case a church, you are a heartless person,” Reese said.
Police said the investigation is ongoing and that more charges could be forthcoming.