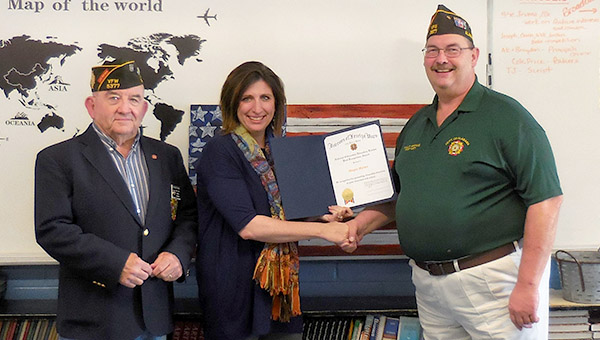 Meggin Mayben, a teacher at Demopolis Middle School, was selected Teacher of the Year by the Veterans of Foreign Wars District 6. District 6 serves an 11-county area. Mayben will now be among eight considered for the VFW’s statewide Teacher of the Year Award. She is pictured with Post 5377 members Douglas Null, left, and Phillip Spence.

After being nominated by the Veterans of Foreign Wars Post 5377, Demopolis Middle School teacher Meggin Mayben has been recognized as the VFW District 6 Citizenship Teacher of the Year for sixth through eighth grades.
Mayben was selected as the winner of the Marengo Memorial VFW Post 5377 competition in February.
“We received many outstanding nominations. (Mayben) is a great teacher and we’re very proud she will be representing our district at the state level,” said VFW Post Commander Lee Belcher.
Mayben’s nomination will now move forward to compete with the nominations from the state’s other seven VFW districts. The winner will be announced in April and will go forward as the nominee to the VFW’s nationwide competition.
“This competition starts with hundreds of nominations from posts across the state,” Belcher said. “Each of the 72 posts may select nominees to move forward to district competition. Only the eight district winners advance to state. These eight teachers are all to be congratulated for their accomplishments and service to our youth.”
VFW Dist. 6 represents 11 counties, from Fayette County to the north, Clarke County to the south, Dallas County to the east, and Sumter County to the west.