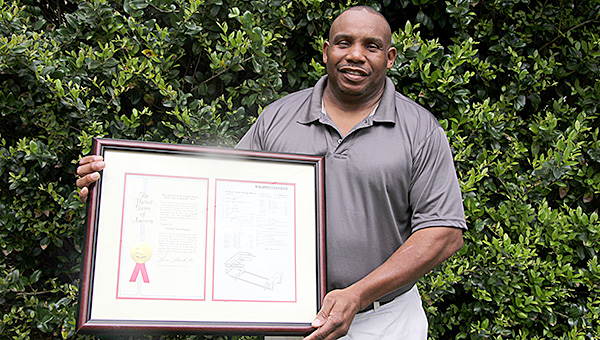 Demopolis native Henry Shepherd holds the U.S. Patent on his “Shepherd Safe Station,” a device that securely and safely keeps irons on an ironing board.

Henry Shepherd has always had an eye for making things work and he has used that talent to create a new device he hopes will be a staple in households across the country.
A native of Demopolis, Shepherd has invented the “Shepherd Safe Station,” which is a device that fastens to ironing boards that holds an iron safely and securely. In 2013, Shepherd secured a U.S. Patent for the Safe Station. He said the idea came to him when he was ironing.
“I was ironing at the house and went to put my pants on the board and I almost tipped the iron over,” he said.
That was in 2009. Shepherd began looking around the stores near his home in Birmingham and other places he visited trying to find something that would keep his iron safely on the board. When he couldn’t find anything, he began sketching out his idea.
“As a contractor, I’m good with measurements and have an eye for things,” Shepherd said.
After drawing up his plan, he submitted it to the U.S. Patents Office in 2010. Three years later he was awarded a patent for his device.
With the patent in hand, Shepherd is now on the search for a way to manufacture and distribute his product.
“I knew I had something when I showed it to doctor’s at the Children’s Hospital in Birmingham. They were amazed because they have a lot of children come in with burns from irons,” he said.
After a long wait, Shepherd paid a hefty fee so that he could show of the Safe Station on the International Housewares Show in Chicago.
“I spoke about it to a panel of seven and they loved it,” Shepherd said. “One of them got emotional because they had a child who had been burned. Everyone I spoke with there said I had something good.”
The housewares show ended on a high note for Shepherd. On the last day of the show, he met with a representative of Household Essentials and Shepherd said he is now in a verbal agreement with that company to license and manufacture the Safe Station.
“I believe this is a product that everyone can use. It’s practical in ironing close and its a safety product that eliminates the concern that a hot iron will fall on somebody,” he said.
Shepherd grew up in Demopolis with his mother, Susie Shepherd and Sara Shepherd, both still residents of the city.