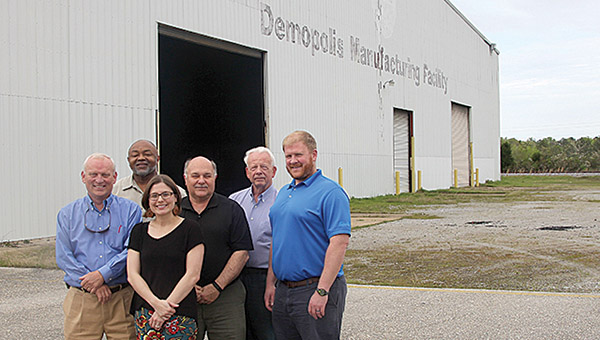 Pictured at the facility that officials hope will be the future home to the Port of Demopolis are, from left, DIDB Member Woody Collins, City Councilman Nathan Hardy, Demopolis Chamber of Commerce Director Ashley Coplin, Mayor Mike Grayson and councilmembers Cleveland Cole and Harris Nelson.

Officials with the City of Demopolis have set their sight on a new project that could bring big changes to the entire area.
According to Mayor Mike Grayson, the city is in the process of applying for grants aimed at renovating the city’s port located west of the city. The grants being sought include the TIGER6 and FASTLANE grants through the U.S. Department of Transportation. The city is also negotiating with port operators and possible tenants for the industrial park area that surrounds the port.
“When you include all the property here, including property owned by the Demopolis Industrial Development Board, we have approximately 200 acres that would have immediate access to rail, an airport, four-lane access, and the port. There are only two other sites like that in the state, one in Mobile and the other in Huntsville,” Grayson said.
Demopolis has several advantages over other possible ports, primarily that the waters here remain consistent. Other advantages include access to two major roadways in Hwy. 80 and 43 as well as rail service in all directions.
“This is an ideal location for a port as we sit at the junction of the Tennessee-Tombigbee and Black Warrior rivers. This is an untapped resource that has been discussed for decades,” said DIDB President Woody Collins.
The facility being eyed as the home for the future port was at one time a barge manufacturing plant. After a government contract for the barges ended, the company left and a few other industries have utilized the building over the years. The city purchased the building in July 2011.
Since taking over the facility, the city has made some improvements in that area, including rebuilding a road to handle heavy trucks, which was paid for using a $400,000 Community Development Block Grant.
“We bought the property knowing we wanted a port,” Grayson said. “We have to have a port operator because it requires very specialized knowledge to operate. It seems this is the right time as things seem to be improving on the waterway and people are wanting to talk about it.”
If a port operator could be secured, they would drudge the port, according to Grayson. Drudging is the process of excavating materials from the river.
The deadline for the grant applications is approaching and officials hope to know by mid-summer if their applications have been awarded. But, they also know that the grants targeted are highly competitive.
In addition to the grants applications for the port, officials said the city is also working toward a grant to add runway lights to the airport, which is visible from the front of the proposed port facility. Another future goal is to renovate the terminal there.
“A lot of businesses use airports and we want them to have a good first impression. You only get one chance to make a good first impression,” Collins said.
Officials said adding a port in Demopolis could bring about very positive changes, not just for the city, but also to the Blackbelt Region and east Mississippi.
“This could be the future of Demopolis,” said Councilman Cleveland Cole.
“It’s interesting that Demopolis was founded by people traveling up the river and, now, 200 years later we see it as a chance to kick start our economy for the future. Once we have a port up and running, more jobs will move into the area. Success breeds success,” Grayson said.