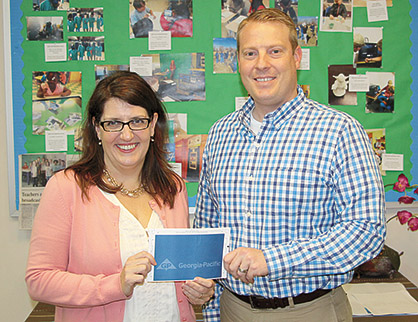 Tim Chatlos, pictured in 2015 presenting a donation on behalf of Georgia Pacific to Demopolis City Schools Foundation Director Amanda Barnes, was hired out of the military by Georgia Pacific to serve as the Naheola plant’s public relations manager. Now, he is helping the company develop a veteran recruitment program.

Georgia Pacific has implemented a new program designed to help military members find work with the company and transition to civilian life. One of those who has helped develop the program is Tim Chatlos who, as a veteran, understands the challenges facing those leaving the military.
After serving over nine years in the U.S. Army, Chatlos was hired by Georgia Pacific and now serves as public relations manager at the Naheola Mill in Pennington. Chatlos spent much of his childhood growing up in Longwood, Florida, northeast of Orlando. He joined the military at 26 to learn more about his chosen career and to get experience.
“I went in to work in public affairs and broadcast journalism which led to me doing television and radio news for the American Forces Network. I did the evening news and morning drive-time broadcasting throughout Europe,” Chatlos said.
After about seven years in the military, he and his wife, Rachelle, began discussing life outside the military and a long-term home for their children: Trevor, 11, and Alice, 7.
“Our kids were getting older and we all wanted to settle into a home. That’s when I began the transition process out of the military and into civilian life. The program is designed to help military members get acquainted with life after the military and to help us translate what we did in the military to our civilian life. I took advantage of that as early as possible,” Chatlos said.
Chatlos worked with a mentor in advertising who helped him create a resumé and build a schedule to make the transition easier.
“The best thing I did in transitioning was to find a civilian mentor in my field. She helped me translate my military experience into a resumé that civilian companies would understand. She also would do mock interviews with me to help me recognize places in my speech where I was using military terminology,” he said.
In August 2015 Chatlos began working at Georgia Pacific. The fact that Georgia Pacific made Chatlos a job offer before he was discharged from the military is rare.
“I jumped right into the position,” he said. “I was very fortunate. I know many people leaving the military will look a long time for work.”
With his military background and having just made the transition himself, Chatlos was asked to help develop a veterans recruitment program for Georgia Pacific.
“It’s never easy going from the rigid lifestyle of the military back to civilian life,” Chatlos said.
The move to the Blackbelt of Alabama has gone well for the family. They were last stationed in a small town in Arizona and he grew up in the South. His wife, on the other hand, is a native of Fairbanks, Alaska. Their biggest concern was for their children who had lived on military bases their entire lives.
“For me, it is nice to be back in the South. I love this atmosphere. It was a bit of an adjustment for Rachelle, but she is enjoying the pace of life. As for the kids, we were concerned about them going to school somewhere other than on a military base. But, they made the transition better than their parents,” he said.
Chatlos added that his transition was aided by many people he has met since the move.
“Everyone at Georgia Pacific is very supportive. The people of Thomasville welcomed us as part of the community and that has meant a lot to us,” he said.
As public relations manager at the Naheola plant, Chatlos enjoys his time in Marengo County and Demopolis. He has represented Georgia Pacific within the community, including presenting donations to the Demopolis City Schools Foundation and the Christmas on the River Committee.
As for those facing the transition from military to civilian life, Chatlos offers some advice.
“Many service members transitioning out of the military are hit with a sense of urgency as the end-of-service date grows closer,” he said. “Reach out to veterans in your job field for advice and go through transitioning classes as early as possible. Lean on people who have successfully transitioned into civilian life because, no matter how prepared you think you may be, you always have room to improve.”