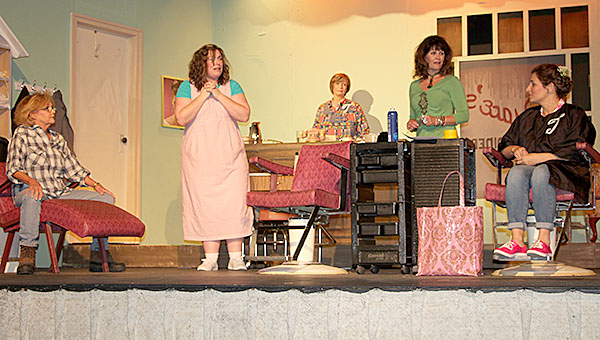 The Canebrake Players will present “Steel Magnolias” at the Canebrake Theatre this weekend. Pictured above during a recent rehearsal are, from left, Ann Parsons as Ouiser, Kelley Freeman Mullins as Annell, Laurie Willingham as Clairee, Deborah Griffith as Truvy, and Andi Turberville as Shelby. The cast also includes Donna Bishop as M’Lynn. Susanna Naisbett is directing.

The Canebrake Players will pull the currents this weekend on its production of the modern Southern classic, “Steel Magnolias.”
Written by Robert Harling, the play centers on a group of gossipy southern ladies in a small-town beauty parlor are alternately hilarious and touching — and, in the end, deeply revealing of the strength and purposefulness which underlies the antic banter. The action is set in Truvy’s beauty salon in Chinquapin, Louisiana, where all the ladies who are “anybody” come to have their hair done. Helped by her eager new assistant, Annelle, the outspoken, wise-cracking Truvy dispenses shampoos and free advice to the town’s rich curmudgeon, Ouiser, an eccentric millionaire, Miss Clairee, who has a raging sweet tooth; and the local social leader, M’Lynn, whose daughter, Shelby, the prettiest girl in town, is about to marry a “good ole boy.”
This is not the first time the Canebrake Players have put “Steel Magnolias” on its stage. In fact, it was the group’s 1992 production of the play that inspired them to do it once again.
“It’s a fun play and everybody knows the storyline,” said this year’s director Susanna Naisbett. “We had planned on resurrecting it last spring, but we were asked to participate in the Southern Literary Trail’s tribute to Tennessee Williams, so we decided on ‘Glass Menagerie,’” Naisbett said.
While some of the faces on stage will be the same as that 1992 performance, the roles have changed, including that of Naisbett who has gone from actor to director.
“Our original production of ‘Steel Magnolias’ was under the direction of the great Walter Brown McCord,” Naisbett said. “I played the part of Ouiser, Ann Carson played M’Lynn who is now playing Ouiser, and Deborah Griffith played Clairee and is now playing Truvy.”
In addition to Carson as Ouiser and Griffith as Trudy, others in the cast include: Kelley Freeman Mullins as Annell, Laurie Willingham as Clairee, Andi Turberville as Shelby, and Donna Bishop as M’Lynn. Others assisting in the production include Jennifer Roman with costumes and Kirk Brooker with art and graphics.
“The cast makes this play work and I think I have the perfect cast,” Naisbett said. “They are easy and fun to work with and they are each steel magnolias in their own right.”
The group began rehearsing at the end of February and Naisbett feels the group is ready to give audiences a memorable theatre experience.
“The production has been going great. Everyone is pouring their heart and soul into it,” she said.
The Players will open the curtains on its first performance Friday, April 22, at 7 p.m. at the Canebrake Players Theatre at the old school building on Main Street. There will be additional 7 p.m. shows on Saturday, April 23, and Monday, April 25. On Sunday, April 24, there will be a matinee at 2 p.m.
Tickets may be purchased at the door and the cost is $12 for adults or $8 for students.