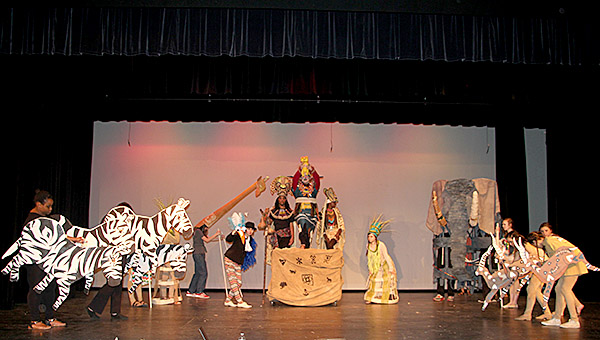 Catherine Akins, in the role of Rafiki, leads the ensemble in the opening song, “The Circle of Life.”

It’s going to be a wild weekend at Demopolis High School as the school’s drama department pulls the curtain on its production of “The Lion King Jr.”
The musical will open Thursday evening and continue on Friday and Saturday at 7 p.m. nightly. There will be a matinee performance on Sunday at 2 p.m.
Through the performance, the African savannah comes to life with the popular Disney characters of Simba, Rafiki and others in a coming-of-age journey. According to DHS Drama Director Jody Tartt, “The Lion King Jr.” offers a unique audience experience.
“I saw ‘The Lion King’ on Broadway over 10 years ago and still have not forgotten the experience,” Tartt said.
An added feature for this season’s production is that the licensing agreement for “The Lion King Jr.” requires that younger students be involved, which led to participation of students from Demopolis Middle School.
The production not only is impressive in its message of growing up, but also in its visual and sound.
“This production is special due to the artistic integrity Disney upheld when they decided to use Julie Taymor as their scenic designer and director. The use of puppetry is genius and just endlessly entertaining to watch. Elton John’s music is very special and I think is one of the reasons the Broadway musical has been successful for so many years. It has outgrossed all four ‘Star Wars’ movies combined. There’s a reason for that. It’s the music,” Tartt said.
All of that entertainment for audiences means a lot of hard work for the students involved. From songs in foreign languages to the elaborate costumes and set, “Lion King Jr.” presented many challenges.
“The students have been challenged in a way they never have before,” Tartt said. “It took us quite a long time to learn the music. There is Swahili and Zulu in many of the songs so they had to, not only learn the music, but also learn the pronunciation of many African words. They also had to learn to manipulate puppetry and masks, which is not always easy for an actor. Not to mention the fact that many of them have had to work on constructing the masks and working on the set along with the many other duties.”
With the elaborate sets, costumes and musical numbers, Tartt said the help of others within the school and community was essential.
“We could not of done this musical without the help of many parent volunteers and teachers. Leslie Gibbs volunteered as an assistant director and Brittany Lowe volunteered to come in and help as an assistant music director. They’ve been invaluable to me. We were also very fortunate to have Garland Farwell, a jewel of a visual artist, who designed our set pieces and the masks used in the performance. They were built using just cardboard and papier-mâché … it was a true joy to watch his work unfold,” Tartt said.
Farwell’s work can be found on the web at blackbeltmurals.com.
Through their preparation and upcoming performances, Tartt said “The Lion King Jr.” has been a great experience.
“It’s been an invaluable opportunity for our students,” she said. “They’ve worked hard to put together a performance that will be entertaining to audiences of all ages.”