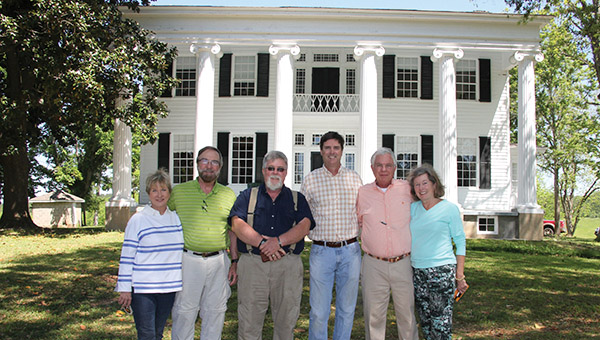 Three brothers recently spent time in and around Dempolis visiting sites tied to the Glover side of their family. Among those sites was Thornhill (pictured) in Boligee. A Glover daughter married into the Thornton family that built Thornhill, although she passed away shortly after the marriage. Pictured are, from left, Anne Boone, Bill Boone, Carl Boone, Brock Thornton Jones (current owner of the Thornhill estate), Dan Boone, and Marty Gresham.

Three brothers recently visited Demopolis to retrace their family history, leading to visits to some of the area’s richest historic treasures.
Dan, Bill and Carl Boone were in Demopolis the weekend of April 22-24 when their trek led them to landmarks like Lyon and Bluff halls in Demopolis as well as the Thornhill estate near Boligee. Traveling with the brothers was Anne Boone and Marty Gresham.
Dan Boone said he and his brothers are descendants of the Glover family that were among those who first settled in the area. Benjamin Glover, he said, came to Demopolis in 1818 from Abbeville, South Carolina along with two brothers, Allen and Wiley Glover.
“They had acquired land grants for property recently acquired from the Choctaws and brought their families. Benjamin was a civil engineer and helped lay out the plans for the City of Demopolis,” Dan said.
Benjamin Glover settled in Boiling Springs, near Catherine, Alabama and died of malaria around 1820. His son, also named Benjamin, inherited his father’s property and built a home there as well as a home in Demopolis. With the assistance of the current landowner in Boiling Springs(the Lawson family), the brothers discovered physical traces of their family’s past during their trip to that area.
“Both of those homes burned some time ago. We found the brick ruins (of the home in Boiling Springs) and a graveyard. We’re not sure the location of the home in Demopolis, but feel it can’t be too far from Bluff Hall and Lyon Hall,” Boone said.
One of Benjamin Glover’s sons, Nathaniel Banks Glover, was born around 1846. During the Civil War, he was injured at the Battle of Chickamauga near Chattanooga. His wife had moved to Georgia for fear that Union troops would invade up the river system.
“His wife went to Chattanooga and took him back on a wagon to her family home in Georgia where he recovered before coming back to Demopolis. Malaria became a problem and in the 1870s they moved to Newnan, Georgia,” Boone said.
In Newnan, Nathaniel’s son, Howard Clarke Glover, was born who is the grandfather of Dan, Bill and Carl Boone. His daughter, Winifred, is the Boones’ mother.
Also traveling with the original Benjamin Boone who obtained the land grants in Alabama was his brother Allen Glover. He and his son, also named Allen, obtained wealth through cotton and his land grant was situated north of present day Demopolis, near Forkland. He became so wealthy that he built the plantation home Rosemont, which still exists today. While the Boone brothers were not able to visit the Rosemont home, they did hear it was undergoing renovations.
“Allen Glover had a paddled-wheeled boat that would take cotton down the river to Mobile. There is a picture of it in Bluff Hall,” Dan said.
According to Dan, Allen Glover helped build Bluff Hall for one daughter as well as Lyon Hall of another who married into the Lyon family.
Yet another daughter married into the Thornton family. That daughter did not live long after the marriage, but the Thornton family would build the Thornhill estate near Boligee. During their visit, Thornhill’s current owner, Brock Thornton Jones, gave the Boones a personal tour of the home that he has been busy renovating over recent years.
“It’s interesting that there are four homes — Lyon, Bluff, Thornhill and Rosemont — that the Glover family is connected to,” Dan said.
After a flood destroyed cotton crops in 1861 and a Union blockade of Mobile in the years after, Allen Glover lost his fortune, went bankrupt and lost Rosemont. He would go on to be the postmaster in Forkland. Allen Glover would also purchase a Gothic Revival style church from Erie, Alabama that he had moved to Forkland. That church was built around 1855 and was designed by Richard Upjohn who designed the Trinity Episcopal Church on Wall Street in New York City. There are stained glass windows in the church recognizing the Glovers. The Boones received a special tour of what is now known as St. John’s Episcopal Church from Jim Byrd.
For the Boone brothers, the visit to the area provided a physical link to their past.
“It was a terrific and meaningful experience,” Dan said. “It was fascinating to see these houses and reconnect with our direct ancestors from 200 years ago. Not many can go back and see things their family had done so long ago. It was a fun adventure that had special meaning to all of us.”
Dan also said he is thankful for groups like the Marengo County Historical Society and the Demopolis Public Library for their roles in preserving local history. The historical society arranged for local historian, Joe Turner, to show the preservation efforts at Lyon Hall to the Boones.
“The people of Demopolis and everyone else we came into contact with were so welcoming and helpful. We met so many interesting people along the way,” he said. “One example was our chance meeting with the receptionist at the Best Western, Renee Nelson. When we inquired about local gospel music, Mrs. Nelson invited us to attend the services at St. Paul’s Baptist Church.”
After leaving Demopolis, the Boones continued their journey into history, traveling to sites along the Blues Trail from Memphis to New Orleans.
Dan and Marty Gresham are both residents of Spring Island, South Carolina; Bill and Anne Boone reside in Atlanta; and Carl Boone lives in Grantville, Georgia.